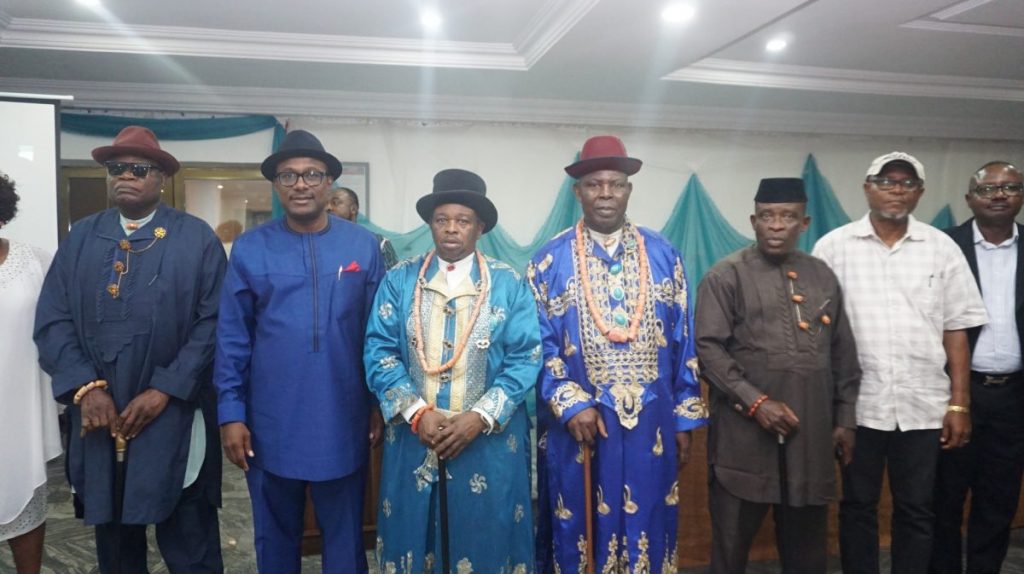 *Simbi Wabote (2nd left) with members of the CIC.

Lagos — The Nigerian Content Development and Monitoring Board, NCDMB, has inaugurated a Community Interface Committee, CIC for the Nigerian Oil and Gas Park Scheme, NOGaPS located at Emeyal 1 in Ogbia LGA of Bayelsa State.

The committee was set up to enhance the interface between the communities, the contractors and the Board and would ensure community participation, cordial relationship and promote compliance to the Community Content elements of the project.

The Executive Secretary NCDMB, Engr. Simbi Kesiye Wabote inaugurated the committee recently during a town hall meeting held to formally introduce the contractors that will execute the newly approved work scopes on the industrial park. He explained that the committee would ensure conducive environment for the execution of the contracts awarded for the development of the site at Emeyal 1 NOGaPS. “Hence, the Board deemed it fit to constitute a committee made up of representatives from the communities, the contractors and the Board”, Engr. Wabote said.

Enumerating the roles and responsibilities of the committee, he announced that His Royal Highness Jephthah Ogba Wolisi will serve as the chairman. Other members include representatives of the host communities, contractors and the NCDMB, while Mr. Kelly Olaye of the NCDMB will serve as the secretary. The committee’s existence will terminate at the completion of the project or whenever the management of NCDMB determines that their services are no longer required.

Speaking further, the Executive Secretary commended President Muhammadu Buhari for approving the next phase of the project which entails the key infrastructure for the NOGaPS site. He noted that the Federal Government was impressed with the harmonious manner way the contractors have been working with the community since the commencement of the project.

Introducing the contractors, he disclosed that Messrs OK Isokariari & Sons would be responsible for the road construction and capacity building centre, which when completed will be a technical skill development centre at the park, while MegaStar Construction Company Nigeria Limited is responsible for the construction of security and administrative block and hostel/mini-estate. According to him, the project will be successfully completed if there is maximum cooperation between the communities, the contractors and NCDMB.

Responding on behalf of the contractors, the chief executive of MegaStar Construction Company Nigeria Limited, Arc. Harcourt Adukeh commended the Executive Secretary for the initiative and stated that the NOGaPS project was the first of its kind where the Board organized a proper kick-off with the community. He appealed to the communities to stick to the terms of reference in providing the workforce for the project and not short change qualified indigenes in the area.

On procurement opportunities in the project, Adukeh indicated that advertisements will be placed on local newspapers and the company’s website for community suppliers to register within a specified window, adding that only successful suppliers who qualify will be considered and notified. He also promised that applicant suppliers that lack requisite documentation will be assisted in a bid to get the persons that will work for the community. He also pledged to promote a cordial relationship with the communities and to visit the paramount ruler to pay due respects.

In his response, the chairman of the Bayelsa NOGaPS CIC, His Royal Highness Jephthah Wolisi thanked the Executive Secretary for the opportunity and pledged the committee’s commitment to making the NOGaPS project a success. He appealed to community leaders and youths to give the project the needed support.

Giving the vote of thanks, the Obhanobham III of Ogbia Kingdom, His Eminence Dumaro Charles Owaba expressed gratitude to the Board for initiating the project and thanked President Muhammadu Buhari for his commitment to the welfare of the communities in the area. He also praised the quality of contractors mobilised to the site while charging all parties to be resolute in the delivery of their duties.

The royal father enjoined all concerned to work harmoniously to achieve the set goals for the overall good of the area to berth development and industrialization. He noted the first oil well in Nigeria which Ogbia is known for had no direct impact on the populace but the advent of the NOGaPS project marks the commencement of development in the area.