NCDMB to partner NSCDC on security 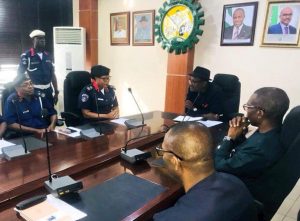 Officials of NCDMB led by its Executive Secretary, Engr. Simbi Wabote (middle), with officials of Bayelsa NSCDC led by its Commandant, Abiakam Christiana, during the visit.

Executive Secretary of the NCDMB, Engr Simbi Wabote, disclosed this when the Bayelsa State Command of NSCDC led by its commandant, Abiakam Omanu Christiana,  paid a courtesy visit to the board’s headquarters in Yenagoa, Bayelsa State.

Wabote, who acknowledged the efforts of NSCDC in the country, promised to collaborate with the security outfit in the board’s future activities.

He said the board will collaborate with the security outfit once the Oil and Gas Park in Emeyal1 and the headquarters building is completed.

Responding, Abiakam Omanu Christiana said the visit was to familiarise with the board and to seek collaboration and corporation with NCDMB in its future activities as its mandate is to protect government properties at all levels.