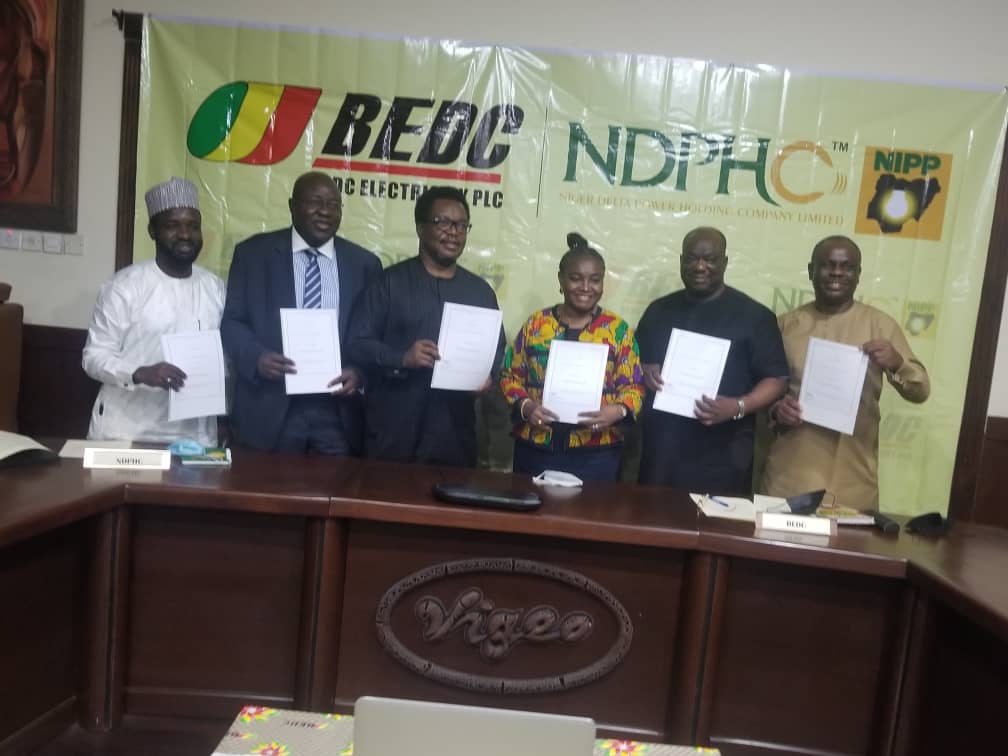 Lagos — The Niger Delta Power Holding Company, NDPHC on Wednesday signed a framework agreement with the Benin Electricity Distribution Company, BEDC to deliver additional 250MW from stranded power to the customer within the franchise area.

He recalled that the two companies had in 2020, commenced exploring options to collaborate to deliver safe and reliable power to customers of the BEDC’s franchise area.

According to him, “today, we are glad that we gather here for the purpose of signing a framework agreement for this collaboration.”

“For NDPHC, the project will enable us to deliver more 250mw of power to customers of BEDC’s franchise areas in Edo, Delta, Ondo, and neighbouring states.

“For BEDC, the project will help BEDC to satisfy its customers with reliable power and achieve an enhancement of its network and infrastructure”.

He added that for BEDC’s customers, their homes and industries can now enjoy 24 hours power supply.

He noted that the NDPHC has been concerned about the “insufficient dispatch of its power generation capacity, as well as liquidity challenges which means that only a small proportion of the power dispatched gets paid for. Meanwhile, many consumers remain unserved or underserved”.

Earlier, the NDPHC boss explained that the journey to the agreement started with initiation of the National Integrated Power Project, NIPP by the Federal Government of Nigeria in 2004 as a government funded initiative to stabilize the country’s power sector.

He said as a result of this, the government incorporated NDPHC as a limited liability company to serve as a legal vehicle to hold the NIPP for its states and local governments.

Since then, said Ugbo, Nigeria electricity supply Industry has evolved significantly from the construction of NDPHC’s 10 power plants with combined capacity of over 5,000mw, of which more than 4,000Mw has been completed, to the privatization transactions from which BEDC emerged as one of the 11 distribution companies in Nigeria.

The evolution, according to him, has presented the industry players, including NDPHC and BEDC, with unique challenges.

He said for the distribution firms, the significant capital investments required to upgrade their respective networks has been difficult to raise due to industry challenges.

She said under the agreement, BEDC and NDPHC will provide end-to-end power solutions across the value chain to deliver minimum of 250mw of additional power.

Osibodu said the collaboration will see the BEDC partner with NDPHC and others to identify and prioritize critical projects to increase power supply whilst improving on technical and commercial environment.

She noted that the “focus will be power supply to certain areas as well as upgrading of all critical distribution infrastructure”.