New Africa gas comes at the right time for Europe 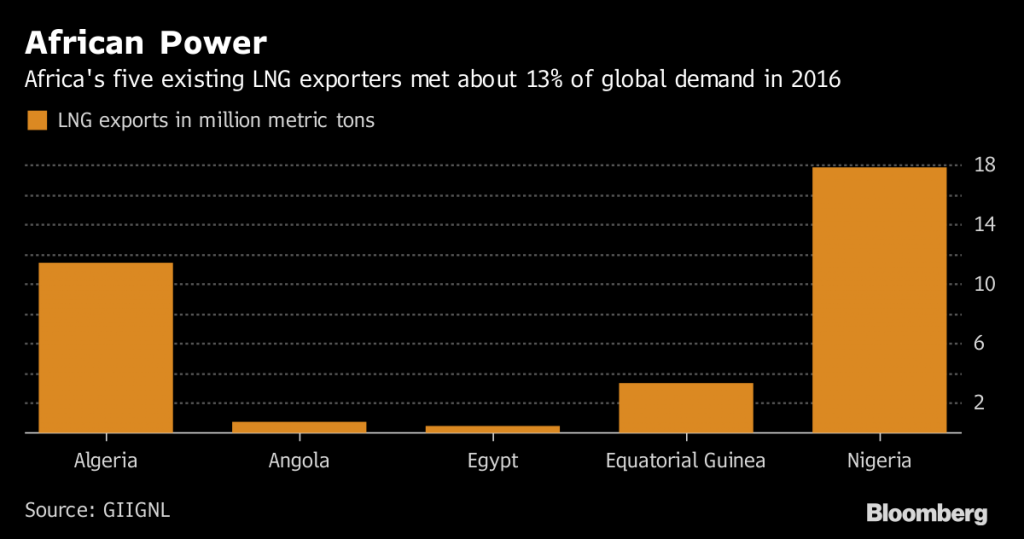 16 December 2017, London — A week ago, Cameroon was getting ready to jostle for space in a global liquefied natural gas market already crowded with new supplies from the U.S. and Russia. Now the extra output couldn’t come at a better time.

France’s Perenco SA and U.S.-traded Golar LNG Ltd. will start shipments from their $1.2 billion LNG project off Cameroon in February, according to people familiar with the plans. That’ll be just in time for a surge of almost a third in European imports, according to consultants Energy Aspects Ltd., after a cold snap and disruptions at supply hubs in Austria, the U.K. and Norway sent gas prices to a four-year high.

“It’s good to see a new African exporter coming into the market,” Trevor Sikorski, head of natural gas and carbon research at Energy Aspects, said by phone. “An obvious market is Europe, particularly when the markets can be a bit stressed.”

Cameroon enjoys a geographical advantage in the European market. It takes about 11 days to ship a cargo to Britain, while a tanker from Qatar, Europe’s biggest supplier of LNG, takes about two weeks. Saving a few days may prove crucial during freezing weather or a sudden supply crisis — a growing risk as the region’s own gas infrastructure ages and becomes vulnerable to breakdown.

Floating Facilities
The Cameroon project — named Hilli Episeyo after its production vessel — is only the second floating LNG facility to come into production worldwide after Malaysia launched a vessel last year. While the latter was built from scratch, the Cameroon unit is a converted LNG tanker. Its success could trigger more investments in the technology, potentially helping companies such as Ophir Energy Plc, which needs funds for a project off Equatorial Guinea.

“Once this project demonstrates its technical, operational and commercial viability, smaller E&P companies and funding sources should become more willing to develop and finance such projects,” said Claudio Steuer, a senior visiting research fellow at the Oxford Institute for Energy Studies.

The recent price jump on the continent has made northwest Europe a more attractive destination for tankers carrying the super-chilled fuel. The U.K. is now set to take the first LNG from Russia’s Yamal project, rather than Asia as initially expected. The $27 billion plant in northern Siberia started production earlier this month, while Cove Point in Maryland is readying for operations too.

The premium for LNG supplies into northeast Asia, the biggest buyer, over southwestern Europe narrowed to $0.80 per million British thermal units this week from as high as $2 in October, according to prices published by World Gas Intelligence.

Russia’s Gazprom PJSC has an eight-year contract to sell Hilli Episeyo’s LNG. While the project is reasonably small — 2.4 million tons a year compared with 5.5 million tons from Yamal’s first of three planned units — it will make Cameroon a net gas exporter and the sixth African nation to supply LNG. Neighboring Nigeria is the biggest, while Angola, Algeria, Equatorial Guinea and Egypt also produce the fuel.

LNG projects such as Hilli Episeyo, while small, could be vital for meeting accelerating demand, according to OIES’s Steuer.

“Demand for LNG is growing three times faster than pipeline gas,” he said by email. “The industry needs a technically and economically feasible solution for smaller-capacity projects.”

For consumers on the continent, the Cameroon supply “won’t be a game changer,” Pan Eurasian President Zach Allen said. “But every little bit adds up.”