Evergreen
Home featured The new push for oil in the North

The new push for oil in the North 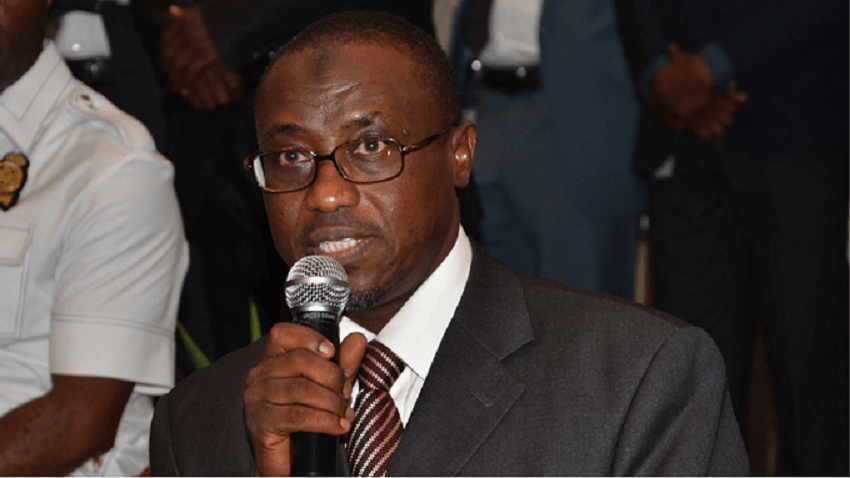 05 November 2017, Sweetcrude, Lagos — The Nigerian National Petroleum Corporation, (NNPC), has become a beautiful bride, with state governors visiting or receiving its Group Managing Director, Dr. Maikanti Baru, at a frequency that seems to ignore legacy and new questions about oil exploration in the Northern part of the country.

The questions include the prospects of a commercial oil find and the justification of the exercise at a time the importance of oil is threatened by alternative fuel.
Last Wednesday in Makurdi, where he hosted Baru, Benue State Governor Samuel Ortom enthused: “Benue people would be excited to have such projects come to fruition, because the state and country stand to reap numerous economic benefits from the development.”
Baru had assured him of oil exploration activities and biofuel projects in the state, expected to generate over one million direct and indirect jobs for the people of the State.

According to him, “due to encouraging results of previous geological studies, basin modeling, aeromagnetic, ground gravity and surface geochemistry surveys, success of ongoing acquisition of seismic data in the Benue Trough will lead to the drilling of oil wells in the State.”
He noted that a contractor, Integrated Data Services Ltd, IDSL, would be going round to carry out a seismic acquisition campaign with heavy equipment where they would be laying long cables with geophones and asked for the protection of the equipment from vandals.
Baru also appealed to Ortom to issue C of O for hectares of land earmarked for the biofuel project enumerating its benefits to include about 63,000 tons of animal feed per year, 64 MW of electricity and 84 million litres of ethanol fuel yearly among others.

ONDO: On the same day came reports of an earlier visit of Ondo State Governor, Rotimi Akeredolu to the NNPC Twin Towers in Abuja for the signing of a Memorandum of Understanding(MoU), to establish a 65,000 million litres per annum biofuel plant in Okeluse, Ondo State.
Baru, according to the statement, said the project”is not fully an NNPC subsidiary and that some investors are also bringing in Foreign Direct Investment into the country for the project.”
Gov. Akeredolu expressed confidence that the biofuel project would take off for the benefit of the people of Ondo and the country in general.

NASARAWA: At a similar stakeholder engagement meeting in Lafia earlier, oil search in Nigeria’s inland basins received a boost following Baru’s announcement of the commencement of exploration activities in the Nasarawa State’s section of the Benue. He said the Presidential mandate was driven by the urgent need for the country to increase its oil and gas reserves, thereby improving revenue streams and creating more business and employment opportunities for Nigerians.
Governor Tanko Almakura expressed delight over the oil search in his state and assured the NNPC of the state government’s support and that of the people of the state.

SOKOTO: During the visit of the Sokoto State Governor Aminu Tambuwal to the Twin Tower, Baru said the corporation had commissioned a team to handle a similar mission in the Sokoto basin.
“We have been on the issue of exploration in the frontier basins and so far some measures of steps have been taken. We have already purchased aeromagnetic data and its being interpreted to determine the sedimentary thickness and the basin configuration,” Mr. Baru said.
“We have also awarded a contract for the geological mapping of the basin. I am happy to state here that samples have been collected, mapped, analyzed, and geological modeling executed to ensure data integration,” he added.
He said discussions were ongoing with the NNPC subsidiary, Integrated Data Services Limited to award contract for surface geochemistry, ground gravity and magnetics.
According to him, this was necessary to determine if hydrocarbon was generated in the basins and importantly, to integrate all data for understanding of petroleum systems the basins.
In his remarks, the governor said historical records, which revealed the presence of huge deposits of hydrocarbon in the Sokoto Basin and the result of various studies carried out by government in the Sokoto Basins would be transferred to the NNPC to aid its exploration efforts.

BAUCHI, GOMBE: Baru had said the NNPC has concluded plans to move heavy equipment to Bauchi and Gombe States preparatory to oil exploration.
“We are here to signify our intention to sensitise the good people of Bauchi and Gombe States on our effort to move back to the Gongola Basin.
“Our intention is to start 3D seismic acquisition and cover as much of the basin as possible, to continue work, in terms of exploring hydrocarbon in the North East. Of course, our activities in the Chad Basin will also be re-activated, as soon as we get clear sign.

Prospects of oil find
Following a Presidential directive, often cited by Baru, the Corporation had resumed oil exploration and related activities in the frontier basins. In addition to the need to increase the nation’s reserves, is the reality of discoveries made in neighbouring countries in basins with similar structural settings with Nigeria. These discoveries, according to the records, include: Doba, Doseo and Bangor all in Chad amounting to over two billion barrels; Logone Birni in Southern Chad and Northern Cameroun, over 10 billion barrel; and Termit-Agadem Basin in Niger totals over one billion barrels.
Frontier basin is a basin where the exploration activities have not been carried out or a basin with short-term exploration activities and a significant volume categorised as undiscovered.
The country’s frontier basins include Chad, Anambra, Bida, Dahomey, Gongola/Yola and the Sokoto basins, as well as the Middle/Lower Benue Trough.
Records show that the search for oil in the Lake Chad Basin area of Northern Nigeria which began some 30 years ago is yielding results as about 21 oil wells out of the 23 drilled so far have potential of full prospects of oil. The cost of exploration has been put at about N27 billion and $340 million respectively.

Oppositionists
Some geologists and politicians are neither convinced by the results nor the promises being made now. They cite studies which indicate that the Nigerian end of the Chad Basin has little potential for commercial oil deposits and would require a huge expenditure in addition to security challenges in the zone.
They say in an era of low crude oil prices, international oil companies would be very unwilling to commit resources to drill in the North, particularly as prospects of commercial finds look largely slim.
A geologist who said he was part of the team that explored the Sokoto basin years ago described the whole exercise as a wild goose chase. According to him, the frontier basins are too shallow and not matured.
Some other stakeholders wonder if the death of University of Maiduguri staff members and abduction of some by Boko Haram; and the threats to the importance of oil were not enough reasons to suspend or curtail the current exercise.
But in a response, a senior staff of an IOC said while every death is painful and regrettable, it “should not freeze human activities.” He also believes that the poor outlook of oil is the more reason to exploit whatever oil resources a country has as quickly as possible.
For some politicians, oil exploration in the North is an agenda to challenge the resourcefulness of the South and also call off the bluff of the South-south, but the counter of other people is that in Nigeria politics and tribalism are read into almost everything.

Cautious views
However, there are geologists who caution that one should not discard what one doesn’t truly know.
“Many African countries went through a similar painstaking exercise and they have now joined the league of oil producing countries,” says Abiding Adesanya, President of Nigerian Association of Petroleum Explorationists (NAPE).
He adds: “We should indeed not politicize the subject because NNPC and other oil companies are still exploring for oil in the Niger Delta.”
A retired director of Shell Nigeria and an experienced geologist explained this in their language: “The inland basins by definition have the potential to be petroliferous. They were dump sites where the right sediments can, under the right conditions, generate hydrocarbons, and under the right conditions, have them trapped. Take Chad Basin: you have hydrocarbons on the Chad side but we have not been lucky to find them on our side in commercial quantities.
“Reason: sediment thickness, trapping conditions and the geothermal history – looks like (I emphasise, looks like) the volcanics that occurred in that trend (and there is evidence in the Biu area) may have resulted in “over cooking” and compromised the trapping.
My conclusion is: don’t walk away from such a basin. Invest in solid high fidelity data acquisition and processing, followed by AND accompanied by “okponku” i.e. sound basin studies.
The same goes for Anambra basin – there the volcanics resulting from the failure of the “opening of a sea” linked to the Atlantic…..and maybe the Mediterranean! (plate tectonics) may have over cooked the sediments there.”

NAPE’s position
At a meeting with Baru last week, NAPE president Adesanya, who disagrees vehemently with people who want the exploration stopped, commended Baru for what he said was a faithful implementation of the recommendations made at NAPE’s conference in 2016 for exploration of the inland basins.
He said NAPE was very impressed with the professionalism being brought to bear on the exploration of the inland basins and that for the first time there was a steady and consistent approach to the campaign.
The NAPE recommendations drawn from a discussion of a panel of experts at the 2016 conference is as follows:

NNPC’s assurance
Baru used the opportunity of the meeting with NAPE and visit to Nasarawa last week to allay fears expressed over the ongoing exercise. In a statement signed by the corporation’s Group General Manager, Group Public Affairs, Ndu Ughamadu, NNPC expressed confidence that the aggressive exploration of the inland basins being driven by the corporation, would soon yield success with hydrocarbon finds in commercial quantity.

According to the statement, based on preliminary results from the exploration activities in the inland basins so far, especially the Benue Trough, there was a strong indication that commercial quantity oil and gas finds would soon be made.

Baru said preliminary results from the exploration activities in the inland basins so far had shown that there could be commercial quantity of oil and gas finds soon in the Benue trough especially.

He said almost 400 square kilometres of 3D seismic data had been acquired in the part of the Benue trough that was earlier explored by SNEPCO, while similar work would be extended to areas previously explored by Chevron and Total.

“We are targeting these areas because we have seen that some of what they have done have some prospects, it is only that they did not drill deep enough. They also did not target the areas we believe, from the review of the seismic data, would have culminated into a find.

“So, we are reinvigorating that and soon we are going to start drilling some of the leads that we have seen to ascertain what prospects there are. And as we have pointed out, there is an indication that we could find some hydrocarbon. We believe that in the nearest future hydrocarbon will be found in commercial quantity,” he explained.

He also commended NAPE for its commitment to growing crude oil and gas reserves in Nigeria, adding that the resolutions from the association’s conference in 2016 gave great impetus to NNPC’s aggressive exploration of the inland basins such as Anambra, Bida, Benue, Chad, Dahomey, Gongola, Sokoto.

Generally, industry experts, who question the wisdom of leaving a country’s resources buried in the ground, are of the view that in oil exploration, it is not over until clear, foolproof evidence shows it is over. They, however, express caution in resource application.

*Bisi, a journalist and author, has many years oil industry experience