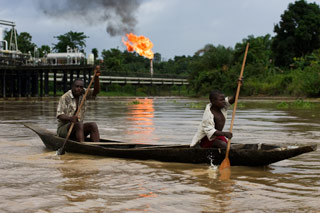 *Fishermen in the creeks of the Niger Delta with gas flaring in the background.

In a statement issued after the Annual General Meeting of the NGMC in Abuja, the NNPC described the company’s performance as impressive, considering the challenges it faced in its operations, notably arising from pipeline vandalism.

The NNPC explained that the company’s total revenue for the year 2018 was N243.63 billion compared to N275.162 billion for 2017, adding that the decline in revenue, attributable to the move by the electric power generating companies to purchase gas directly from gas producers since June 2018.

It added that the NGMC is mainly engaged in sourcing, marketing and distribution of natural gas to major industrial users and utility companies in Nigeria and the West Africa sub-region.

Speaking at the meeting, Group Managing Director of the NNPC, Dr. Maikanti Baru, who is also the Chairman of the Board of Directors of the NGMC, maintained that the company would do everything to sustain the impressive performance.

Baru, who was represented by Chief Operating Officer, COO, Gas, and Power of the NNPC, Engr. Seidu Mohammed stated that NGMC had already signed contracts with some companies in the Republic of Benin.

He said, “We have to expand our portfolio, we are going into the West African market to position ourselves as the best marketer of gas in the sub-region.”

On his part, Managing Director of NGMC, Engr. Mohammad Barau attributed the company’s impressive performance to the support given to it by the NNPC management which helped to resolve some of its challenges and motivated the company to embark on an aggressive drive for customers, resulting in increased earnings.