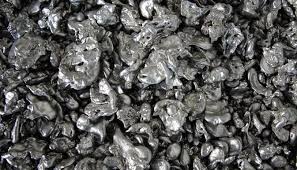 *Discovery of nickel in Kaduna confirmed.

*Govt. to produce a detailed report on the discovery

15 September 2016, Sweetcrude, Abuja – The abundance of native nickel balls recently discovered in Nigeria has been described as “an extraordinary occurrence in a style not known to have been previously documented”, by Comet, a private mining syndicate headed by veteran Australian miner, Mr. Hugh Morgan.

In a paper distributed at the Africa Down Under Conference which held September 7 – 9 in Perth, Australia, the company said the discovery had “important implications” for nickel exploration worldwide.

The metal named “Titan”, measuring 0.1-5.0 millimetres in diameter and weighing an estimated three weight percent, was found on the southern margin of the Jos Plateau, near the rural villages of Dangoma and Bakin Kogi, Kaduna State.

“Although the bedrock has not been tested at depth, the wide distribution of abundant nickel metal balls and their secondary ferruginous alteration product within residual weathered bedrock at Titan indicates a highly endowed primary mineralized system,” Comet said.

“To our knowledge, this style of high-grade native nickel metal deposit has not been previously documented.”

Sweetcrude Reports had reported, last month, about the “world class and highly unusual” nickel discovery in Nigeria, ahead of the Perth conference.

Nigeria’s Minister for Solid Minerals, Dr. Kayode Fayemi, was among the speakers at the three-day event held at the Pan Pacific Hotel in Australia.

According to the permanent secretary at the ministry, Mohammed Abbas, the discovery was made “many months ago” and urged the public to allow the government produce a detailed report.

The Comet team said the metal was identified and exploration commenced in early 2015.

Traces of other metals such as zinc, copper, lead, and cobalt were also detected in the core and rims of the nickel.

The team said ongoing activation of major bedrock structures in the area had resulted in recent tectonic shift and exposure of fresh nickel metal at the surface in an erosional drainage basin at Titan.

“However, the nickel balls are not physically (concentrated) into a heavy mineral fraction within the soil cover sequence due to the low erosional gradient in the catchment and the freshness of the bedrock.

“Furthermore, the exposed metal balls are prevented from significant oxidation due to good drainage and the formation of a protective stable secondary oxide layer on the metal surface.”

The project area spans 20 square kilometres where high concentrations of ferruginous brown balls extend over a half a kilometre to the north and west of the nickel metal occurrence.

“Although the bedrock has not yet been tested at depth, the wide distribution of abundant nickel metal balls and their secondary ferruginous alteration product within residual weathered bedrock at Titan indicates a large highly endowed primary mineralized system,” Comet said.

“To our knowledge, this style of high-grade native nickel metal has not been previously documented.”

The Comet team is currently focusing its exploration on developing a nickel project that targets the native nickel balls in the shallow weathered bedrock over an area of a half square kilometre.

The company is reportedly seeking funding to continue exploration and has approached a few interested parties.

Nickel is primarily sold for first use as a refined metal. About 65 percent of it, consumed in the West, is used to produce stainless steel.

The world’s largest producers of the metal include The Philippines, Indonesia, Russia, Canada, and Australia, according to the US Geological Survey.

Last month, Mr. Fayemi told Bloomberg that one of the Nigerian government’s priorities is to meet its annual steel demand of 6.8 metric tons, from a current output of less than 2.5 metric tons, produced mainly from scrap iron.

“In two to five years, we want to have started production of iron ore, lead, zinc, bitumen, nickel, coal, and gold on a serious scale,” Mr. Fayemi had said.