Niger Delta Avengers to oil companies: It’s about to get bloody 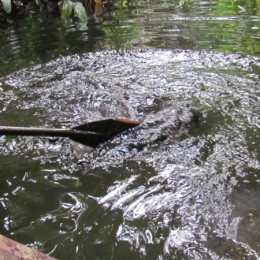 01 June 2016, Sweetcrude, Abuja – The militant group, Niger Delta Avengers, NDA, has issued a warning to oil companies working in the region that its campaign is about to get bloody.

The militant group has launched a steady string of attacks on oil and gas infrastructure in the region, issuing a manifesto earlier this month that warned oil companies the attacks marked only a beginning.

The Niger Delta Avengers spokesman, Murdoch Agbinibo noted in a statement obtained by our correspondent in Abuja that the group was frustrated by what it saw as a lack of attention to the region paid by Nigerian President Muhammadu Buhari.

In its latest string of attacks, the group took credit during the weekend for blowing up pipelines operated Royal Dutch Shell and a subsidiary of Italian energy company Eni. It warned that “something big” is about to happen.

“To the international oil companies and indigenous oil companies, it’s going to be bloody this time around,” Abginibo said. “Your facilities and personnel will bear the brunt of our fury.”

Responding to the report from the Nigerian military that it led a successful campaign against the group during the weekend, the NDA said it was not engaged in combat with the Nigerian army and no arrests were made.

“The Nigerian military cannot intimidate us by harassing innocent Niger Deltans,” he noted in the statement.

The group’s latest statement coincided with a report emailed from Amnesty International that said Shell was not making good on its pledge to clean up decades of oil pollution in the Niger Delta. The company was behind at least 130 different oil spills last year, the advocacy group said.

According to Amnesty International, the Niger Delta is one of the most polluted places in the world. The Niger Delta Avengers, for its part, said the region is largely ignored by the Nigerian government.

The Buhari administration said it would start a campaign to clean up the region later this week. From Amnesty’s perspective, that gives Shell the opportunity to pass its responsibilities onto others.

Rights campaigner, Joe Westby said in a statement that oil companies are obligated to clean up after themselves, no matter what the cause.

“The tragedy is that the oil spills continue to destroy the livelihoods of thousands of local people to this day,” he said.