on: December 17, 2018In: Community Development, featured 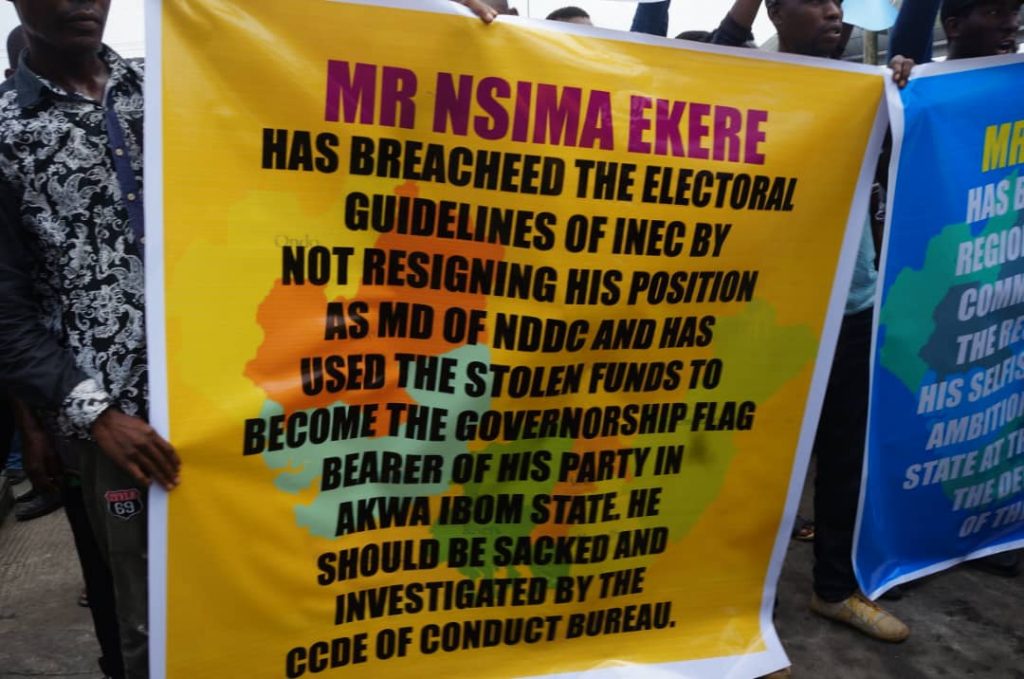 *Protesters at the NDDC headquarters in Port Harcourt.

17 December 2018, Sweetcrude, Port Harcourt — Indigenous contractors with the Niger Delta Development Commission, NDDC, at the weekend staged a peaceful protest to the head office of the Commission, demanding for the sack of the Managing Director, Mr. Nsima Ekere, over failure to pay them for contracts executed.

The protesters, number over 20, bearing placards with different inscriptions, alleged that they have not been paid for the past three years, after delivering their projects.

The leader of the protesters and Coordinator of the Indigenous Contractors, Mr. Alexander Erema Pepple, alleged that the Nsima Ekere led board of NDDC has failed.

Pepple called on President Muhammadu Buhari, to intervene in the matter by calling the Managing Director of NDDC to order.

He also accused Ekere of frustrating the region, shortchanging the people and contravening the electoral laws by holding sway as the Managing Director of NDD9 and bearing the governorship ticket of the All Progressives Congress in Akwa Ibom, at the same time.

According to him, “This Nsima Ekere led board is diverting funds for contractors to their personal use. They have been very wicked to the region. We have been shortchanged, the jobs that are meant for Niger Delta indigenous contractors are given to people in Abuja.

“He should be sacked because we are tired. He is frustrating the whole region. Only this month, over 50 contractors have been here for uncountable engagement but he (Ekere) always give us empty promises that does not hold water.

“The annoying part is that the international oil companies are paying so much funds to NDDC, yet nothing to show for it.

“We are telling the world, and we are calling on Mr. President to please come to our rescue because we are tired of the situation.We cannot take it anymore.

“The annoying part is that Nsima Ekere is the Managing Director of NDDC and also the APC governorship candidate in Akwa Ibom, which contravenes our electoral laws,” the protesting contractors said.

However, the management of NDDC and the Managing Director of NDDC, Mr. Nsima Ekere, is yet to respond to these allegations.