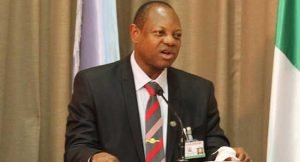 The group which issued the federal government till Monday to refute or correct its statement on the sack of Boroh by using the appropriate channel, declared that Boroh’s sack would jeopardize the peace process in the Niger Delta.

A statement signed by the advocacy group’s spokesman, Comrade Ebitare Pere, said they are not satisfied with the way Gen Boroh was sacked, citing what they described as “procedural loopholes” in the sack.

“There are a lot of procedural loopholes in the letter that purportedly sacked General Boroh, that we are tempted to believe President Muhammadu Buhari may not be aware of this sack.

“For instance, we wonder why the purported sack letter was not signed by the Secretary to the Government of the Federation (SGF) but a spokesman to the President. Since when did it become the duty of spokesmen to sign weighty state matters like this,” the spokesman queried in the statement.

“We are therefore giving the federal government till Monday to refute or correct its statement on the sack of Gen Paul Boroh by using the appropriate channel,” it stated.

The group also queried why the office of the National Security Adviser (NSA) was instructed by the letter instead of the Economic and Financial Crimes Commission (EFCC) and its sister anti graft agencies to investigate Boroh.

“We would like to know when the NSA became an anti graft agency that investigates financial misappropriation in Nigeria?” The NDYM queried

The group also called on President Buhari to restrain the NSA from interfering in the management of the Amnesty office, and urged him to concentrate on the North-East and Middle Belt where Boko Haram terrorists and herdsmen are on a rampage on a daily basis.

The group also frowned at the request of the NSA for the handover to the new amnesty boss to be conducted in his office instead of the Amnesty office.