27 October 2014, Abuja –  The Federal Government has raised an alarm over the decline in the global crude oil prices, saying that it is already putting in place stricter measures to cushion the effect of the drop on the Nigerian economy.

“Nigeria has two to three months of rainy day savings to cushion it while contingencies are put in place should world oil prices continue to fall,” Ngozi Okonjo-Iweala, Co-ordinating Minister for Economy told the Financial Times. 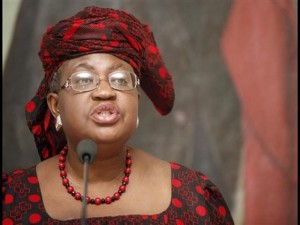 Okonjo-Iweala disclosed that should oil price dip below $78, the country would have to draw down on the Excess Crude Account (ECA).

She said, “Our intention is not to run in there and raid it, but even if prices continue to go down we can survive sufficiently for two to three months. That is the time needed to get other measures in place. What you don’t want is a hard landing.”“Our buffers are slimmer this time,”

Okonjo-Iweala acknowledged, adding that there is about $4bn in the ECA at present, $2bn short of what the International Monetary Fund had recommended.

She further stated that the country needs to ramp up our non oil revenues on the fiscal side, adding that global consulting firm, McKinsey, has been engaged to carry out an extensive review of revenue services in order to identify potential gains.#

Okonjo-Iweala added that she was encouraged by an exhaustive data review, which saw Nigeria’s economy overtake South Africa’s as the continent’s largest, showing that the economy had diversified to a much greater extent than previously thought.#

She said, “In an oil country you can never feel at ease exactly. But I feel we can master this situation because we have a diverse base.“ We will have to look very hard at recurrent expenditure, and identify overlapping agencies. When the price is heading down everyone sees the necessity but that doesn’t stop them hating you.

Okonjo-Iweala agreed, however, that lower oil prices would provide a stronger incentive to government to rein in oil theft, which has cost billions of dollars a year, and help to drive through stalled oil sector legislation to stimulate production.

“That would enable us to pick up quantity to help us cushion on the price side,” she said.

The Federal Government, which depends on oil typically for about 80 per cent of revenues, is assuming an oil price of $78 per barrel for its 2015 budget, up from $77.5 per barrel in 2013 and precariously close to recent world prices.

Nigeria was in a much stronger position last time the world price of oil tumbled, with about $22bn squirrelled away in the ECA. Those funds helped the country weather the 2008 global financial crisis with economic output relatively unscathed.

But during recent boom years the government has persistently used the ECA, dividing out the proceeds among the 36 states in the federation, which are constitutionally entitled to their share.Nigeria also holds foreign reserves equivalent to $39″billion.

These have come under recent pressure as the central bank has stepped in to prop up the naira, but still cover nine months worth of imports.

Nigeria’s ratio of non-oil tax revenues to GDP, at 4.5 per cent, is among the lowest on the continent. McKinsey helped South Africa broaden its tax base to the tune of about $3bn and Okonjo-Iweala believed similar gains were possible over the longer term in Nigeria