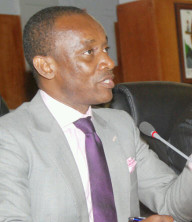 Already he said the Commission has issued licences to independent private power plant operators for generation of over 20,000 megawatts (Mw) of power within the next three years.

Amadi who was a quest speaker at a town hall meeting on power sector organised by The Redeemed Evangelical Mission (TREM Church)in Minna, Niger State yesterday said with 12,000 Mw, the nation’s power need can be met.

“Life has thaught us that nothing is impossible. We can make 30,000 Mw within the next one year if we want. Already we have issued licences to investors to generate over 20,000 Mw before 2016. I am sure that with all the efforts put in place our power generation will surely surpassed our target by 2016,” the NERC boss assured the nation.

He said the huge foreign investment in the sector in recent time was a product of the reforms and regulations put in place by the government.

“The sector has been without frame work, no cost related terms and inconsistency in policy had been the order of the sector but it is now being regulated. This has built confidence in investors which in turn will boost the sector and our national generation level,” he said.

Amadi complained that the sector suffered decades of total neglect and appealed for understanding from Nigerians as the result of the reforms in the sector will be gradual, adding that new sources are being utilised to increase generation.

He said gas is being considered as another veritable means of power generation but stressed that the gas sector requires a review. He added that more incentives need to be given to encourage the use of gas for power generation, instead of selling it off as liquified natural gas (LNG).

Amadi expressed concern over the volume of gas flared daily in the country. He said: “The best way to stop gas flaring, aside the global cry for it stoppage is to give incentive to encourage the use of gas for the power sector.”

According to him, the Commission has encouraged the distribution company (DISCO) in Port Harcourt to work with small entrepreneurs in the area on the possibility of setting up small generation units using gas being flared as the source.

Aside from this, the NERC chairman said DISCOs are being encouraged to establish small modular power generating plants of between 10 and 20Mw outside the national grid network.

On the contentious monthly service charge levied on electricity consumers by various DISCOs, the NERC boss said the commission has directed that no payment should be made when electricity is not supplied for upwards to two weeks and above.