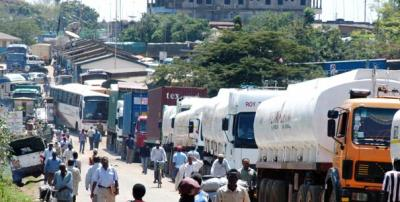 *Vehicular traffic at the Seme border.

Lagos — Some petrol stations located at Seme boarder have been granted permission by the federal government to reopen for operations.

Due to illegal activities reported to be committed by filling stations in Badagry, the federal government had on November 7, 2019, suspended fuel supply from 20 kilometers to the border communities.

However, updates from the Seme Command of the Nigeria Customs Service, said nine filling stations have been granted permission to reopen.

The Acting Customs Area Controller, Chedi Wada, while giving the warning on Tuesday at a meeting with the nine petrol marketers and some security agencies under the Seme border drill operation, warned the nine filling stations permitted against sharp practices.

According to the acting controller, the nine marketers should count themselves lucky that they were selected to resume selling petroleum out of 168 filling stations in Seme, Gbaji, Apa, Kweme and Owode border areas.

“As you are aware, the Federal Government suspended fuel supply from 20 kilometers to the border communities on Nov. 7, 2019 because filling stations in Badagry were being used to commit all forms of illegalities.

“Count yourself lucky that out of 168 filling stations in Badagry communities, you are selected to be among the nine permitted to resume sales of petroleum products.

“I am using this opportunity to appeal to you to do the needful by doing what is right.

“If your filling station is found wanting or engaging in any form of illegality ranging from selling in jerry can to siphoning fuel inside jerry can in your backyard, you will be sanctioned.

“If you are caught, we will not only seal your filling station; we will also revoke your license, and your stations destroyed so that it will not exist again.

“We have eyes everywhere as you may be aware by now.

The acting area controller said any bank or industry that needed to buy more than the approved litres should always contact his office for approval.

He warned that selling and buying of petroleum products in all filling stations along the border communities should not exceed 6p.m, adding that any station found selling after 6p.m. would be sealed.

Responding on behalf of the nine filling stations, Mr Samuel Sedangaji, Managing Director, Luri Oil and Gas in Owode, promised that they would abide by the laid-down rules and regulations.

Sedangaji thanked the Federal Government for allowing the filling stations within the border communities to start selling fuel again a few months after they were suspended.

He said that this showed that the government had responded to the plight of people residing in border communities.

The officials present included Representatives of the Office of the Nigeria Security Adviser, the Immigration Service, and the Directorate of State Service.