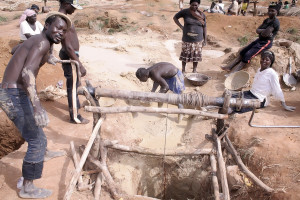 14 January 2015, Sweetcrude, Abuja – The Federal government announced that it has retained 54 coal titles and revoked 44 others out of a total of 119 initially listed for revocation.

A statement from the Mining Cadastre Office in Abuja indicated that 13 coal titles have also been relinquished while four others are still under processing.

According to the statement, the revocation was based on the companies’ non-compliance with the Nigerian Minerals and Mining Act, 2007, dormancy, non-submission of statutory report and non-payment of annual service fees.

Western Goldfield Group Limited, Dome Minerals Nigeria Limited and Nifex Limited were among the top three on the list whose coal titles have been revoked.

The statement also indicated that the coal titles that were relinquished also submitted satisfactory reports.

However, the office stated that the revocation of some coal titles was as a result of unsatisfactory report submitted and inactiveness.

Some were also revoked for having defaulted and not submitting report to the regulatory body as required.

Meanwhile, the notice indicated that the four coal titles of Owkpa Consolidated Mines Limited are still under processing as a result of the unsatisfactory performance “in compliance.”