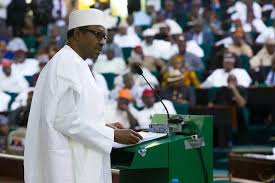 23 December 2015, Sweetcrude, Abuja — The Federal government said on Tuesday it anticipates to earn N820 billion ($4 billion) from oil exports in 2016.

The calculation is based on a production assumption of 2.2 million barrels per day (b/d) and a benchmark price of $38/barrel.

This compares to this year’s projected oil earnings of N3.9 trillion ($19 billion) which was predicated on output of 2.28 million b/d and a price assumption of $53/b which was not realised, as global oil prices plummeted to a multi-year low while Nigeria’s production suffered from theft and the lack of new investment.

Presenting the 2016 budget proposal of N6.08 trillion ($30.1 billion) to the National Assembly, President Muhammadu Buhari, said the sharp decline in oil earnings meant the government would need to restructure the oil and gas sector, to check corruption and inefficiencies.

The president also said he had directed the state oil firm, Nigerian National Petroleum Corporation (NNPC), to explore alternative funding to enable it fund its share of joint venture (JV) oil projects both in onshore and deep offshore fields.

He said, “We are confident that these measures can be achieved and will lower the burden that the traditional cash calls have imposed on our budget and cash flows as well as contribute towards shoring up our national reserves.”

NNPC chief executive Emmanuel Kachikwu said recently that Nigeria was unable to meet its cash call obligations of about $615.8 million/month for this year, largely due to fallen oil prices.

Buhari also confirmed the government’s bid to cut subsidy on fuel imports next year, saying that the state fuel pricing regulatory agency PPPRA has been directed to “adjust its pricing template to reflect competitive and market driven components.”