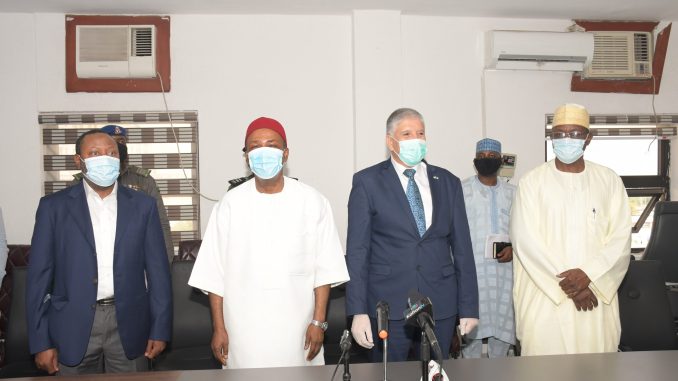 *What Nigeria can achieve with methanol production

Lagos — Nigeria and Israel on Monday agreed to sign a bilateral agreement on methanol fuel production technology.
During a courtesy visit by Israeli Ambassador to Nigeria, Mr. Shimon Ben Shoshan to the Ministry of Science and Technology both agreed that production of methanol fuel would be of mutual benefit to both countries.

In his remarks, the Minister of Science and Technology, Dr. Ogbonnaya Onu said Nigeria is determined to explore and develop the Methanol chemical fuel technology because it allows for diversification which would eventually lead to wealth creation and employment for its youths.

Dr. Onu, who described methanol as a “wonder chemical’’, expressed optimism that its application will impact positively the power, energy, and manufacturing sector, adding that with its introduction, Nigeria will soon become the manufacturing hub of Africa.

He added that Nigeria would appreciate the inputs of Israel to ensure the smooth takeoff of the methanol policy.

In his address, the Israel Ambassador Mr. Shimon Ben Shoshan said Israel will be too willing to share its know-how and expertise on methanol fuel technology with Nigeria.

He said the methanol fuel technology is a better alternative to petroleum as it is cheaper, faster ad pollution-free.
Mr. Shoshan also said that his country is also amenable to learn from Nigeria’s indigenous technology as well as its progress in oil and gas technology.

What is methanol?
Methanol is a nondrinking type of alcohol (also known as wood alcohol and methyl alcohol) which is mostly used to create fuel, solvents, and antifreeze. A colorless liquid, it is volatile, flammable, and unlike ethanol, poisonous for human consumption. Methanol is also used to produce a variety of other chemicals, including acetic acid.

Antifreeze
Methanol has chemical properties that allow it to lower the freezing point of a water-based liquid and increase its boiling point. These attributes lead methanol to be used as an antifreeze in windshield washer fluid to keep the cleaning fluid from freezing. It is also injected in natural gas pipelines, where it lowers the freezing point of water during oil and gas transport.

Solvent
Methanol is primarily used as an industrial solvent to help create inks, resins, adhesives, and dyes. It is also used as a solvent in the manufacture of important pharmaceutical ingredients and products such as cholesterol, streptomycin, vitamins, and hormones.

Fuel
Roughly 45 percent of the world’s methanol is used in energy-related applications. Methanol can be used as a type of vehicle fuel or marine fuel for boats. It can also be blended into gasoline to produce an efficient fuel known as methyl tertiary butyl ether, MTBE which can have lower emissions than conventional gasoline. Methanol also is used in biodiesel, a renewable type of fuel made from plants or animal fats that can be used in place of, or blended into, conventional fuel.

Food
Methanol occurs naturally in many foods, including fruits and vegetables. Dietary methanol helps to regulate human gene activity. It is also created in the human digestive system to help metabolise food.

Toxicity
Methanol occurs naturally in the human body and in some fruits but is poisonous in high concentration. Ingestion of 10 ml can cause blindness and 60-100 ml can be fatal if the condition is untreated. Like many volatile chemicals, methanol does not have to be swallowed to be dangerous since the liquid can be absorbed through the skin and the vapors through the lungs. Methanol fuel is much safer when blended with ethanol, even at relatively low ethanol percentages.

Fire safety
Methanol is far more difficult to ignite than gasoline and burns about 60% slower. A methanol fire releases energy at around 20% of the rate of a gasoline fire, resulting in a much cooler flame. This results in a much less dangerous fire that is easier to contain with proper protocols. Unlike gasoline fires, water is acceptable and even preferred as a fire suppressant for methanol fires, since this both cools the fire and rapidly dilutes the fuel below the concentration where it will maintain self-flammability. These facts mean that, as a vehicle fuel, methanol has great safety advantages over gasoline.

China uses methanol
Despite acceptability challenges methanol currently faces, countries that we look up to today in terms of rapid development- China uses it.
Methanol is used as a cooking fuel in China and its use in India is growing. Its stove and canister need no regulators or pipes.

China is the global leader in methanol use and has recently expanded its methanol production capacity. Now, a study commissioned by the US Energy Information Administration, EIA from Argus Media (a global provider of analysis on energy and commodities), finds that since the early 2000s, China’s consumption of methanol in fuel products has risen sharply. The report estimates consumption to have been more than 500,000 barrels per day as far back as 2016.

EIA commissioned the study to better understand China’s consumption of methanol and its derivatives. The estimates developed in the study have now been incorporated into EIA’s historical data and forecasts of petroleum and other liquids consumption in China.

Is Nigeria ready?
Despite the numerous benefits of methanol as seen above, is Nigeria truly ready for its production locally? Will the elites who are already deep-necked in the pecks attached to fossil fuels especially crude oil allow this brand of fuel to thrive?- These questions and other derivatives if sincerely tackled, putting sentiments aside, could lead to an explosion of an outstanding alternative to fossil fuels, and a revenue boost for the country.

Extraction and production of crude oil in Nigeria spans over 60 years and provides over 80 percent in revenue for the country. Revenues from crude oil and gas are majorly deployed to develop other sectors and for developmental projects.

Obviously, from its uses and benefits, if latched on, methanol could earn Nigeria- if not as much as fossil fuel does, it could earn something close and boost access to foreign exchange which Nigeria always needs.

And just maybe, the country would spend less on importation of petroleum products as this methanol could serve as alternative to a larger number of Nigeria’s over 200 million population who might prefer it to fossil fuel, however, is Nigeria really ready to go all the way as it did with crude oil and gas? This question is pertinent as various alternative energy investors have indicated that there are cartels who consistently frustrate development of alternative sources of energies in-country. Even the federal government seems to be complacent in the game by looking the other way as far as aggressive development of alternative energies is concerned.

Conclusion
Israel already imports methanol. More so, an Israeli plant is in development stages.
A review of ethanol demand in several countries by Israel’s ministry of energy and water resources indicates that when Financial feasibility for choosing Alternative Fuel Vehicles, FFVs option is available, market penetration is swift, and as long as the alternative fuel maintains a competitive price, consumers will tend to prefer it over conventional gasoline. Because FFVs are available with no additional costs, the model assumes that the purchase rate of new vehicles in Israel is the only effective constraint for the potential penetration of FFVs. Apart from corruption bottlenecks, policies which does not make new vehicles affordable in Nigeria can mitigate against use of methanol. A larger percentage of Nigerians buy secondhand cars.

This means that government needs to enact policies that encourage Nigerians to buy new cars, facing out tokunbos- this is the only stance methanol can replace gas or petrol in cars since transportation sector consumes more fossil fuel in Nigeria, else, Nigeria can as well forget using methanol for transportation and focus on its other usages.