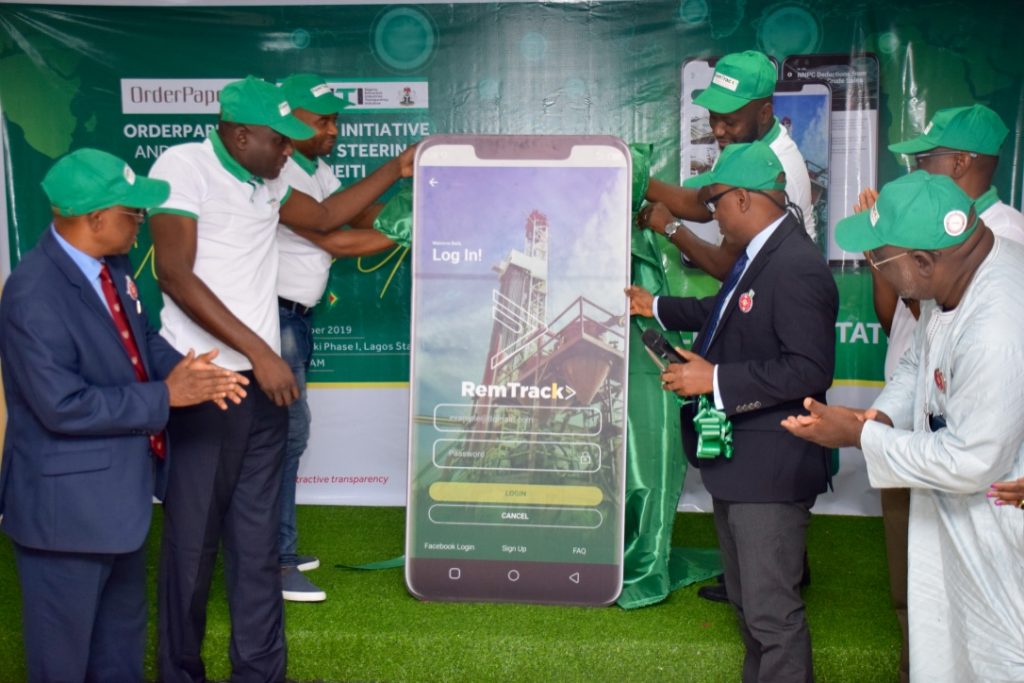 Lagos – To advance the quest for a transparent and accountable oil and gas industry that begets better benefits of resource extraction to citizens, Nigeria has unveiled an application called RemTrack for mobile phones and other hand-held devices.

The application built and designed to complement the remediation function of the Nigeria Extractive Industries Transparency Initiative (NEITI), contains simplified and user-friendly data in the annual audit of the industry released by the agency.

RemTrack is a global first, an innovation Nigeria has introduced among all members of the Extractive Industries Transparency Initiative (EITI), an extractive industry watchdog promoting good governance in the oil, gas and mineral sectors and which is represented by affiliated sub-sets in 51 countries of the world.

The public unveiling of the RemTrack app took place in Lagos, Nigeria’s commercial capital on Tuesday, December 3, 2019. The event attracted stakeholders from the oil and gas industry, government regulatory agencies, civil society players, and media practitioners, among others. The technology tool was developed and deployed by Order Paper Advocacy Initiative, a civil society organization in Nigeria, in conjunction with the Civil Society Steering Committee (CSSC) of NEITI.

Mr. Waziri Adio, Executive Secretary of NEITI, told the gathering that the emergence of RemTrack will immensely add value to the work of his organization and called on citizens of Nigeria to take advantage of the platform for healthy and constructive engagements.

Delivering a keynote address before the unveiling of the app, the NEITI boss noted that the app is a major milestone in attempts to fix remediation issues arising from his agency’s reports.

He explained that RemTrack has come to simplify the process of tracking issues and implementation of recommendations arising from periodic reports of the agency, and more importantly, to involve all stakeholders, whether players in the sector, journalists, civil society organisations and all citizens who have mobile devices, in the process of remediation.

“This is a major milestone for the Civil Society Steering Committee but also for us at the level of NEITI and also for the country as other people have mentioned,” he said, adding that “this is something that all Nigerians should take credit for, especially the people who midwifed the process.”

He continued: “Yes, it is an app but it is also more than an app for reasons that others have mentioned. This is very significant; it is a major milestone in the quest for transparent and accountable governance of our extractive resources. The app is called RemTrack for a reason, it is a remediation tracker and as mentioned before, remediation is a critical part of our work. We do 3 things; we do reporting, which is publishing the audits, we do dissemination because there is no need just publishing so if we do the audits we have to disseminate it to critical stakeholders and beyond that, we so what is known as remediation.”

Urging Nigerians to engage the app so that its benefits can be unlocked for the overall benefit of the country, he added: “This signifies the quest to leverage on technology to solve problems. It is a very sensible and smart thing to do in the age that we live in. We live in an age that is the age of technology so, if we don’t take advantage of it, we are just shooting ourselves in the leg.”

The executive secretary, however, cautioned against viewing remediation in money terms only, while calling for focus on how to fix systematic procedural issues that keep knotty issues from reoccurring.

On his part, Mr. Kolawole Banwo, Chairman of the Civil Society Steering Committee of NEITI, said the RemTrack tool would enhance easy engagement by all and make accurate information readily available for use at any time. He said he felt fulfilled that he actively participated in the process that birthed the app and lauded OrderPaper Advocacy Initiative for achieving the feat.

Representative of Nigeria’s Revenue Mobilisation, Allocation and Fiscal Commission (RMAFC), Mr Babatunde Odu, expressed delight about the RemTrack app, saying it would aid the commission to effectively carry out its functions.

He stated: “The core mandate of my organisation is to monitor accruals into the federation account and disbursement from the same account to the three tiers of government, adding that this is an app that will provide essential information to even ordinary Nigerians on what exactly is going on or being generated, though in the oil and gas and extractive industries will go a long way in enhancing our operations in RMFAC.” He called for replication by other agencies.

Remarking on the app, Executive Director of OrderPaper Advocacy Initiative, Mr Oke Epia, assured that the app is not designed to humiliate or deride anyone, but solely for the good of country. He explained, “We have not designed it as a tool to deride or witch-hunt anybody or stakeholder. Rather, we are putting in the hands of citizens, a simplified dataset of knowledge and germane information on the state of Nigeria’s extractive industry as contained in the annual audits of NEITI.

“All that we have is all that we have been given by the transparency watchdog and nothing more. This is therefore to assure you that the integrity and sanctity of data contained in the app have met highest possible standards of co-creation and authorization. We are careful to place in the hands of citizens a verified and validated tool that promises only healthy, factual and evidence-based engagements we all will be happy about at the end of the day.

“Like we have in our ConsTrack mobile app for civic engagements in budget and public projects tracking, the RemTrack app boasts of the highest standards of content verification and validation which have gone through layers of vetting across value chains.”

RemTrack is a technology-for-development intervention built to organize the audit reports into user-friendly data on remediation issues, progress and outcomes of reconciliation, and the covered entities. The app is designed for android and apple devices to be used in mobile phones and other hand-held devices.