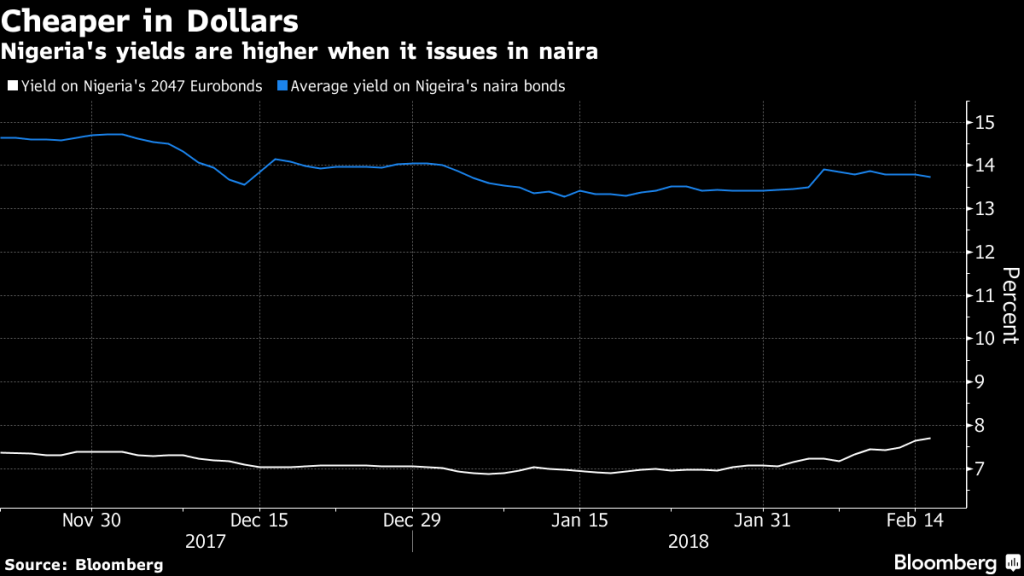 Nigeria sold $2.5 billion of Eurobonds as it sought to lower funding costs by using the notes to refinance higher-yielding naira debt.

Africa’s biggest economy on Thursday issued $1.25 billion of 12-year securities with a yield of 7.14 percent and a separate 20-year tranche, also $1.25 billion, at 7.7 percent, the finance ministry said on Twitter. Investors placed more than $11.5 billion of orders, according to the ministry.

The sale completes a program of increasing foreign debt to help reduce the burden of double-digit yields on local-currency bonds. Nigeria says the extra funds will be used to improve infrastructure and help revive the economy after it contracted in 2016 for the first time in a quarter-century.

The level of demand for Nigeria’s bonds was “impressive,” especially given that global risk appetite is “significantly higher” today than when it last issued dollar debt around three months ago, Neville Mandimika, an analyst at Rand Merchant Bank in Johannesburg, said in a note to clients Friday.

Nigeria sold a record $4.8 billion of Eurobonds last year, most recently in November, when it issued $3 billion of 10- and 30-year debt. Yields on the latter rose six basis points to 7.7 percent by close Thursday, the highest they’ve been. They fell 11 basis points to 7.59 percent by 12:32 p.m. in Lagos on Friday. Nigeria’s local bonds have an average yield of 13.7 percent, according to data compiled by Bloomberg.

“Using the new external issuances to reduce domestic financing will certainly lead to lower borrowing costs, as we have already started to see,” said Christopher Dielmann, senior economist at Exotix Capital, in a note to clients Thursday. It will also “help reduce roll-over risk associated with shorter-tenured domestic issuance and provide a much-needed degree of fiscal space.”

Nigeria follows Egypt, which became the first African sovereign to tap the market this year when it sold $4 billion of debt on Feb. 13. It is rated B- by Moody’s Investors Service, one level below Nigeria. The most populous Arab nation paid 6.59 percent for 10-year notes and 7.9 percent for 30-year bonds and attracted $12 billion of bids from investors.

Angola, Ghana, Ivory Coast and Kenya have all said they are considering Eurobonds soon.