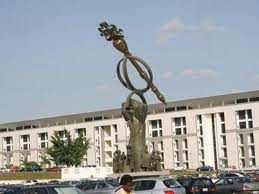 It also approved the exchange rate at N305 to a dollar as proposed by the executive for the 2017 fiscal year.

The approval followed the adoption of the report by a Joint Committee on Finance, Appropriation and National Planning presented on Wednesday at plenary.

Presenting the report, Chairman of the Committee on Appropriation, Sen. John Enoh, said that the joint committee interacted with the Federal Ministries of Finance; Budget and National Planning and Mines and Steel Development, and other agencies.

“In its determination to arrive at a realistic MTEF and FSP for the next three years, the committee considered the actual performance of the 2016 Budget and the previous MTEF and FSP,” Enoh said.

He said that the joint committee had observed that the core parameters of the 2016 budget were based on oil benchmark 38 dollars per barrel, oil production of 2.2 million barrels per day and exchange rate of N197 per dollar.

“However, available records show that between January and October 2016, the country produced an average of 1.7 million barrels per day.

“Frequent destruction of oil installations by the Niger Delta militants have been blamed for the decline,” Enoh added.

He, therefore, urged the Federal Government to curtail the activities of the militants in order to halt the drop in oil production and achieve the 2.2 million barrels production benchmark for 2017.

On non-oil revenue projection, the Senate approved the projected N5.12 trillion for the year, with the task on revenue generating agencies to intensify revenue collection drive.

The chamber also adopted the sum of N807.57 billion as Federal Government Independent Revenue for the fiscal year.

It, however, recommended the review of the legal framework of relevant agencies and government-owned enterprises.

“This will ensure that agencies pay operating surplus and remit appropriately, their gross revenues into the Consolidated Revenue Fund (CRF),” it added.

The lawmakers, however, insisted that such borrowings “should be on project tied basis”.

In a remark, Deputy President of the Senate, Ike Ekweremadu, who presided at plenary, said that by the approval of the MTEF and FSP, the senate had taken a very important step towards the passage of the 2017 budget.

He expressed gratitude to the Minister of Budget and National Planning, Sen. Udo Udoma, for providing the senate with all the information required to consider the report.

Ekweremadu said that such collaboration would help the National Assembly in considering the 2017 budget.