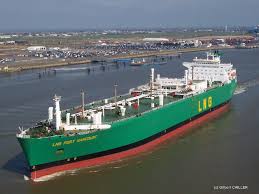 It is the latest gas supply by the Nigeria LNG Limited, NLNG, to the European country under a sales-purchase deal struck

LNG carrier LNG Port Harcourt II, owned by Bonny Gas Transport, BGT, a subsidiary of the Nigerian LNG Limited, is transporting 175,000 cubic metres of the chilled fuel and will discharged its content at the REN’s Sines LNG import terminal on Portugal’s Atlantic coast on the due date.

The company was incorporated as a limited liability firm on May 17, 1989, to produce LNG and natural gas liquids, NGL, for export, thus putting to use Nigeria’s over 180 trillion cubic feet of natural gas reserves, which is being flared due to lack of adequate utilisation programme.

Since the Nigeria LNG plant began operation in 1999, it utilises 3.5 billion (standard) cubic feet of gas per day to produce 22 million metric tonnes of LNG per annum from its existing 6 trains. Plans are on for building Train 7 that will lift the total production capacity to 30 million metric tonnes per year.