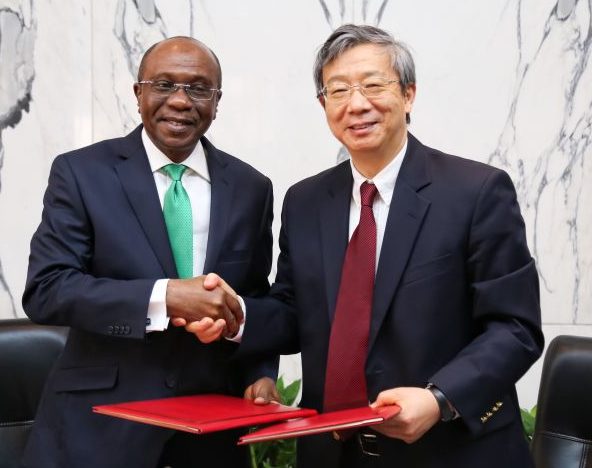 03 May 2018, Sweetcrude, Lagos — Nigeria has entered into a currency-swap agreement worth $2.4 billion with China.

A statement released by China’s central bank, disclosed that the deal signed by Yi Gang, governor of the People’s Bank of China, and Godwin Emefiele on April 27, is aimed at boosting commercial ties and reduce the need to use the dollar in bilateral trade.

The agreement is a three-year swap worth 15 billion yuan or N720 billion naira.

The deal which has been in the pipeline for over two years now, will “provide naira liquidity to Chinese businesses and provide renminbi liquidity to Nigerian businesses respectively, thereby improving the speed, convenience, and volume of transactions between the two countries,” the Central Bank of Nigeria said in a separate statement. It will allow Nigerian companies to import spare parts and raw materials from China by sourcing renminbi from local banks and help them avoid “the difficulties of seeking other scarce foreign currencies,” it said.

China is Nigeria’s second-biggest trading partner after the U.S., with volumes between the two totaling $9.2 billion in 2017, according to data compiled by Bloomberg.

Nigeria runs a deficit, importing $7.6 billion of goods including textiles and machinery from China and exporting just $1.6 billion, mainly oil and gas.

Nigeria suffered dollar shortages after the 2014 crash in oil prices, which battered the OPEC member’s economy. Those foreign-exchange scarcities have eased in the last year thanks to an almost 45 percent rise in Brent crude prices to $72.91 a barrel and an increase in portfolio investments.

Nigeria attracted fund inflows by opening a currency-trading window for foreign investors known as Nafex, in which the naira was allowed to weaken. The currency-swap with China was calculated at the Nigerian central bank’s official rate for the naira of around 305 per dollar, rather than the Nafex rate of 360.5.