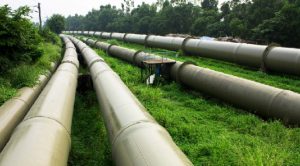 A section of the Trans-Niger pipeline

19 December 2018, Sweetcrude, Lagos — Nigeria suffered a daily average crude oil production deferment of 725,859 barrels in 2017, according to data from the Department of Petroleum Resources, DPR.

According to the recently-released DPR’s Nigerian Oil and Gas Industry Annual Report, NOGIAR, 2017, total producing fields in the year under review was 184 while 101 fields were shut-in.

In all, the DPR said, the average production deferment or crude oil not produced due to shut-in in oil fields in 2017 was 725,859 barrel per day.

It would be recalled that as at January 2017, militants in the Niger Delta region were still launching heavy attacks on oil facilities, which explains why the month of January saw the highest number of shut-ins and volume of crude oil losses in the year.

This was prior to Federal Government’s cease-fire initiative led by then Acting President Yemi Osinbajo, which minimised attacks on oil facilities and ensured increased oil flow from the fields.

It indicated that of the 101 oil fields shut-in during the year, the Shell Petroleum Development Company of Nigeria, SPDC, was responsible for 25. It shut in the 25 fields following down operations of its Trans Forcados Pipeline, TFP, and Trans Niger Pipeline, TNP. Mobil Producing Nigeria had 15 shut-ins, citing as reason the closure of its Qua Iboe terminal in Ibeno, Akwa Ibom State.

Nigerian Agip Oil Company Limited, NAOC, had 13 shut-ins, which it attributed to sabotage of its evacuating pipelines; Addax Petroleum had 8 shut-ins; Total E & P also had 8; Chevron, six; Eroton, two and Aiteo, one.

For Niger Delta Petroleum Resources Ltd, NDPR, it shut in 14 fields due to leak in the Trans-Forcados Pipeline and operational issues and Pan Ocean shut in seven oil fields.