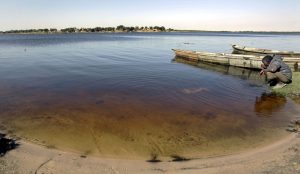 *A native drinking water from the Lake-Chad. Photo – AP/CHRISTOPHE ENA.

01 August 2017, Maiduguri — Nigerian scientists will continue to search for oil in the restive Lake Chad Basin region despite a kidnapping of some researchers by suspected Boko Haram members, a university and state oil firm NNPC said on Monday.

Members of an oil prospecting team were kidnapped in the northeast’s restive Lake Chad Basin region on Tuesday, prompting a rescue bid that left at least 37 dead including members of the team, rescuers from the military and vigilantes, officials say.

Three kidnapped members of the oil team later appeared in a video seen by Reuters on Saturday.

“The Vice chancellor said the University of Maiduguri won’t check out of the oil exploration in the Lake Chad despite the recent unfortunate incident,” said Danjuma Gambo, a spokesman for the university.

He confirmed comments attributed to the vice chancellor in a NNPC statement during a visit of NNPC delegation. Some of the dead were from the geology department of the university of Maiduguri, capital of Borno state and birth place of a Boko Haram insurgency.

The insurgency has killed 20,000 people and forced some 2.7 million to flee their homes in the last eight years, and the frequency of attacks has increased in the last few months. At least 113 people have been killed by insurgents since June 1.

On Sunday, the acting president’s spokesman said Nigeria had scaled up its military response to the Boko Haram insurgency and will secure the northeast.

President Muhammadu Buhari left Nigeria on May 7 to take medical leave in Britain for an unspecified ailment. He handed power to his deputy, Osinbajo, seeking to allay concerns of a void at the helm of Africa’s most populous nation.

The government and military have repeatedly said Boko Haram – which also carries out cross-border attacks in neighbouring Cameroon and Niger – was on the verge of defeat.