Nigeria to Spend 24% of Revenue on Debt Servicing in 2016

28 March 2016, Abuja – Nigeria is to spend 24 per cent of its revenue in 2016 for debt servicing, which is lower than the amount recent speculated.  The Representative of Islamic Development Bank (IDB), in Nigeria, Abdallah Kiliaki said recently that the country pays about 75 of its debt for debt servicing. 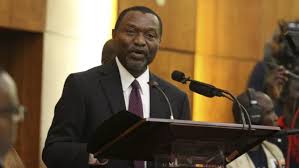 Kiliaki was quoted to have stated during a visit to the Chairman, Senate Committee on Local and Foreign Debts, Shehu Sani.

“When talking about unsustainable debt, it means that a country or a borrower is unable to pay. So, we take very that very seriously. When you look at the debt GDP ratio of Nigeria, it is very low. It is 17 per cent compared to Italy and other countries which is about 150 per cent, while that of the United States is about 100 per cent. But there is a caveat; it is true that debt to GDP ratio is low but when you look at the amount, the revenue to debt servicing ratio, the amount of money that the government is collecting, the revenue of the government vis-a-vis the ratio to the total debt, I think Nigeria pays about 75 to 80 per cent of its revenue to service debt,” Kiliaki had said.

Government agencies and some financial experts had faulted the statement of the IDM representative. However, THISDAY checks showed that in the 2016 Appropriation Bill passed   last week, about N1.48 trillion will be used to service debt, which is about 24 per cent of the total   budget. This is lower than the 32 per cent spent in 2015.

A Lagos based Financial Analyst,  Kingsley Ume,  who is Principal Partner, Astra Bold Investments Ltd  had decried the  tendency to  bandy  of statistics  capable of misleading  stakeholders, saying it is advisable to cross check properly.

‘’It is really unfortunate that people who should point the way for others are the ones who misrepresent the facts. It is inexcusable for a Representative of a global institution such as the IDB to claim that Nigeria spends 80 per cent of its revenue on debt service when the correct position is 32.1 per cent. One may be forgiven for thinking that  Kiliaki was merely being alarmist or trying to whip up sentiments about the state of the Nigerian Economy’,” he said.

The Managing Director of   International Monetary Fund (IMF), Christine Lagarde had expressed similar fear about the Nigerian Economy, warning Nigeria not to borrow. But analysts had faulted Lagarde’s comments.