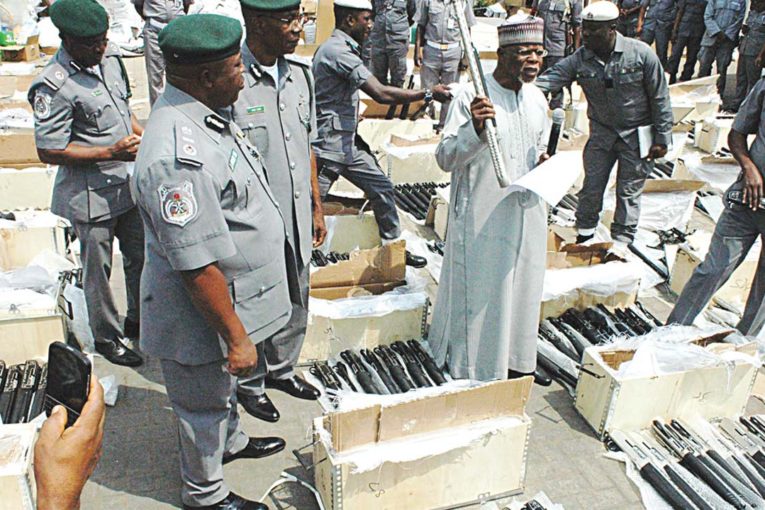 *Retired Col. Hameed Ali, Comptroller-General of the Nigeria Customs Service inspecting a cache of arms and ammunition impounded by his officers.

22 November 2017, Sweetcrude, Lagos — THE Federal Government through the Comptroller General of the Nigeria Customs Service, NCS have signed a Memorandum of Understanding with its Turkish counterpart aimed at stemming the importation and proliferation of arms, ammunition and other illicit cargoes.

Speaking to newsmen at a stakeholders meeting held at the headquarters of the Nigerian Shippers Council in Apapa, Lagos, the Comptroller General of the Nigeria Customs Service, NCS, Col. Hameed Ali, (Rtd) accused shipping firms particularly foreign lines operating in the country of aiding and abetting illegal arms importation saying that the illegal importation of arms and ammunition was the biggest concern facing the Customs Service.

Ali also said that the trend has not only become a source of concern to Customs and Nigerians but also to the security and well being of neighbouring countries.

In the case of Cameroon there are some people threatening secession because the proliferation of small arms within Nigeria are channeled to those agitators.

Ali explained that the mutual agreement between both countries is such that all imports emanating from Turkey will be transmitted to the Nigeria Customs before the arrival of the cargoes.

He further disclosed that the Customs Service has handed over the list of prohibited items to its Turkish counterpart.

The Customs boss explained that if shipping firms collaborate with Customs to block the loopholes that importers were exploiting, the proliferation of small arms and ammunition would be effectively curbed.

He warned that any vessel caught in the transportation of prohibited and banned cargoes will be arrested and detained adding that the security of the country cannot be compromised.

The retired army officer also told shipping companies that any changes in the ship manifest midway into a voyage will henceforth not be acceptable noting that, this was what the arms importers used as a decoy to bring in illicit cargoes to Nigeria.

He also said the all containerized cargoes must be placed on pallets except for bulk cargoes.

“Carrying out examination on cargoes without pallets was always a problem as the use of pallets in containerized cargoes makes cargo examination easy and faster.

“We looked at issues affecting the maritime industry especially with regard to shipment of arms and that was why we invited the shipping lines and other stakeholders.

“We have sat down, we have listened, we have resolved with stakeholders that we will work together, they have given us their commitment.

“There were issues that were raised when I spoke at the opening of the meeting which brought issues like manifest and midstream transfer and the shipping companies have given suggestions on how best we can approach these issues.

“We must have a standard, we must have synergy between us, that way we can achieve 24 hours cargo clearance time”.

Explaining further, Ali said that in the light of implementing the Executive Order which was signed by Vice President Yemi Osinbajo as Acting President, the Customs need the cooperation of every stakeholder so as to make the implementation of the order successful.

Earlier in his opening remarks, the Executive Secretary of the Nigerian Shippers Council, Barrister Hassan Bello called on stakeholders to join hands with the Customs Service to make the port a better place to do business and facilitate trade.

He said the execution of trade policies alone without the cooperation of stakeholders could make the Executive Order unimplementable.