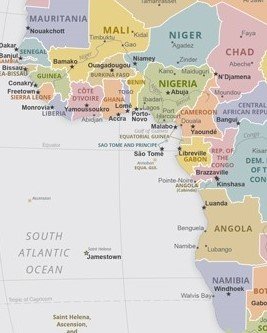 Lagos — The top U.S. military officer in Africa says he is concerned about China’s growing commercial and military influence there — including plans to locate a large naval port somewhere on the continent’s Atlantic coast.

In an interview with The Associated Press, U.S. Army General Stephen Townsend said Beijing is looking to establish a port capable of hosting submarines or aircraft carriers on Africa’s western coast. Townsend said the Peoples Republic of China (PRC) has contacted countries stretching from Mauritania to Namibia, intent on establishing a naval facility. If realized, that prospect would enable China to base warships in its expanding Navy in the Atlantic as well as Pacific oceans, the AP reported.

“They’re looking for a place where they can rearm and repair warships. That becomes militarily useful in conflict,” said Townsend, who heads U.S. Africa Command. The People’s Liberation Army Navy opened a base on Africa’s East Coast in Djibouti in 2017. “Now they’re casting their gaze to the Atlantic coast and wanting to get such a base there,” the AFRICOM commander said.

The U.S. base in Djibouti – Camp Lemmonier, a former French Foreign Legion post – is America’s only permanent base on the African continent (See story below). The U.S. and PRC bases are only 12 kilometers (just under 7.5 miles) apart, near the strategic Horn of Africa that overlooks waterways (Red Sea, Gulf of Aden) that link Europe via the Suez Canal with the Indian Ocean and South Asia.

In written testimony submitted to the U.S. House Armed Services Committee April 20, Townsend noted the PRC has been investing heavily in Africa, pledging $60 billion in infrastructure and development — and increasing arms sales to African countries.

“Beijing’s activities in Africa are outpacing those of the United States and our allies as they seek resources and markets to feed economic growth in China and leverage economic tools to increase their global reach and influence. The People’s Republic of China has 52 embassies in Africa, three more than the U.S., and they continue to expand their base in Djibouti into a platform to project power across the continent and its waters—completing a large naval pier this year,” Townsend told the congressional panel. 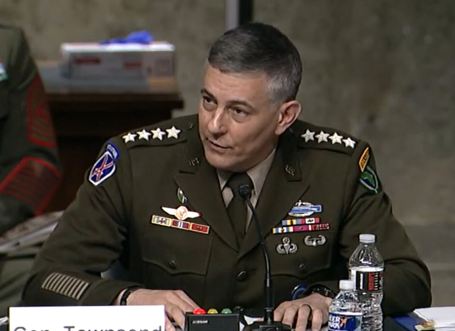 “Beijing seeks to open additional bases, tying their commercial seaport investments in East, West and Southern Africa closely with involvement by Chinese military forces in order to further their geo-strategic interests,” he added.

In a virtual meeting with U.S. Secretary of State Antony Blinken on April 27, Nigeria’s Muhammadu Buhari said the United States should consider moving its military headquarters for Africa, to help battle a series of recent clashes with armed rebels, as well as continued efforts to push back on militant Islamist groups like Boko Haram, The Hill website reported.

“Considering the growing security challenges in West and Central Africa, Gulf of Guinea, Lake Chad region and the Sahel, weighing heavily on Africa, it underscores the need for the United States to consider re-locating AFRICOM headquarters… near the theatre of operation,” said Buhari, according a statement issued by the presidency, Reuters reported.

Nigerian security forces face multiple security challenges including school kidnappings by armed gangs in its northwest and piracy in the Gulf of Guinea as well as the decade-long insurgency by the Islamist militant group Boko Haram, which also carries out attacks in neighboring Niger, Cameroon and Chad, the news agency noted. (See story below).

In the latest incident, at least seven police officers were killed in Nigeria’s oil-rich Rivers State on May 7. Gunmen opened fire on a checkpoint in the southern state, then drove to two police stations, killing officers and burning patrol cars, the BBC reported. Police killed two of the attackers but are searching for those who escaped. It was not clear who was behind the killings, but the region has seen a surge in separatist attacks on police, BBC noted.

Dissatisfaction with Buhari’s handling of the security threats has grown in recent weeks among civil society, political and religious groups. A former army general, Buhari was elected in 2015 and re-elected in 2019 on promises to subdue jihadist extremists, who have killed over 36,000 and displaced more than two million. But six years later, things are getting worse. Boko Haram is expanding its enclaves in Nigeria’s northwest, while banditry, kidnappings and communal violence is on the rise, the VoA site noted. Nigeria’s military said it will uphold the country’s democracy and warned against plots to overthrow Buhari.

West Africa’s Sahel region is in the grip of a security crisis as groups with ties to al Qaeda and Islamic State attack military forces and civilians, despite help from French and United Nations forces.

In Niger, unidentified gunmen killed 16 soldiers and wounded six others in an ambush in the country’s southwest, security sources told Reuters on May 2. The attack on an army patrol occurred the day before in the Tahoua region of the West African country, near where raids killed 137 civilians in March. It is unclear who carried out the attack.

The conflict has cost more than 3,000 lives and forced 550,000 people to flee to French-speaking regions of Cameroon or into neighboring Nigeria, according to the United Nations.

Buhari’s request Blinken was a reversal of previous President Umaru Yar’Adua’s opposition to AFRICOM command establishing a presence on African soil. In fact, when then-President George W. Bush created the U.S. military’s sixth geographic combatant command there was a pretty large outcry in Africa that this was just another imperialistic move by a Western power. Only one country – Liberia – offered to host AFRICOM’s headquarters, but U.S. officials decided to keep the headquarters in Stuttgart Germany.

The April 27 U.S.-Nigerian meeting came a week after one of Africa’s longest-ruling leaders, Idriss Déby, the president of Chad, died in clashes with rebel groups.

Deby had been with troops battling rebel groups based across the northern border in Libya at the time of his death, though the exact cause was not immediately clear, the New York Times reported.

The late Chadian president had long been considered an ally of the U.S. and France in the fight against Islamist extremists in the region, though rebel groups had repeatedly attempted to overthrow the government over his management of Chad’s oil wealth and crackdowns on political opponents.

Unrest in Chad after President’s Death.
In the immediate aftermath of the death of Chad’s president, Idriss Déby, a transitional council of military officers named Déby’s son, Mahamat Kaka, interim president, Reuters reported. The council also announced that an election for the next president will be held in 18 months. Until then, the government and National Assembly have been dissolved, and the country is under a nationwide curfew, according to the New York Times.

However, opposition to the undemocratic power shift is growing. The African Union has called for an end to military rule in Chad. The African Union’s Peace and Security Council voiced “grave concern” about the military takeover which put 37-year-old General Mahamat Déby Itno in charge and saw parliament dissolved, the BBC reported.

Opposition parties have also condemned what they called a “dynastic coup”.

Meanwhile, Chad’s ruling military council are seeking support from its central African neighbors in fighting rebels who they say endanger a smooth return to civilian rule.A delegation sent to Cameroon told the neighboring state’s president that without peace, a transition to civilian rule will be impossible. Chad’s opposition says the military rulers should immediately step down if they genuinely want peace to be restored.

Abdelkerim Idriss Deby, deputy director of cabinet Abdelkerim, said Chad has been witnessing a series of protests and deadly rebel attacks that are threatening its unity since Deby died, according to VoA, He said Chad’s military council has sent him to all member states of the Central African Economic and Monetary Community to explain plans the military leaders have for a smooth transition to civilian rule. He said Chad needs the assistance of its neighbors for peace to return.