Nigerian content: Experts call on Dangote, others to invest in renewables 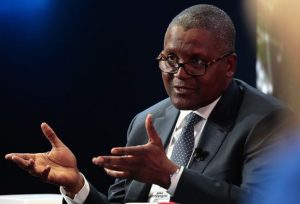 13 November 2018, Sweetcrude, Lagos — Experts in the renewable energy sector have called on Nigerian billionaires, Aliko Dangote, Tony Elumelu and others to invest in the sector.

The call was made by off-grid power experts, Ify Malo and Weibe Boer, on the sidelines of an event in Lagos on Monday.

According to them, leaving investments in the hands of foreigners will subvert targets of the Nigerian content law.

“The renewable energy sector is growing and is becoming a huge market globally but we wonder why Nigerian billionaires are not looking into investing in the sector. The likes of Dangote, Elumelu, Otedola are rich enough to invest in the market but we don’t know why everyone is after fossil fuels,” Malo said.

“I get nothing less than 20 job applications from engineers every day. I end up employing some of them but there are no jobs to go round. So, if we allow foreign investors come in to take over the industry, they will bring expatriates who will take over our jobs. They will set terms to favour them. If they invest 300 million naira, they will take away 600 million from us. So, why don’t our people who have the money help this country grow”, she further stated.

Earlier today, a report by Thisday Newspaper had quoted the Nigerian Content Development and Monitoring Board, NCDMB, as issuing a warning to the Nigerian Liquefied Natural Gas company, NLNG, to not endanger the local content law with the proposed Train 7 contract which it sourced out to two foreign companies.

NLNG had awarded the contracts for the Front End Engineering Design, FEED of its proposed Train 7 to two consortia – B7 JV Consortium and SCD JV Consortium.

The B7 JV Consortium comprises American company KBR Incorporated, Technip of France and Japan Gas Corporation (JGC); while the SCDJV Consortium, consists of Saipem of Italy, Japan’s Chiyoda and Daewoo of South Korea.

However, in a letter dated November 6, 2018, the Nigerian government issued out the warning following concerns that some of the foreign promoters of the project could flout the NOGICD Act of 2010, which provides that certain scopes of the contracts shall be executed by Nigerian companies.

Signed by the NCDMB’s Director in charge of Monitoring and Evaluation, Mr. Tunde Adelana, the agency said information reaching it suggested that some of the foreign shareholders of NLNG have indicated their unwillingness to comply with the Nigerian Content laws and guidelines in the execution of the NLNG Train-7 Project.

“For the avoidance of doubt, we wish to caution at this moment that the Board will not entertain any attempt to circumvent the provisions of the NOGCD Act, 2010 by any company operating in the Nigerian oil and gas industry,” it said.

The agency added that it would continue to periodically carry out review of the NLNG Train-7 project to ensure that all Nigerian content plans, requirements and commitments are strictly adhered to.