Nigerian economy on a debt cliff 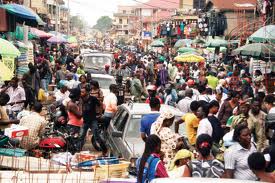 03 June 2013, Lagos – Nigerian economy is on the stranglehold of debt. At the national, sub-national, corporate and individual levels, debts owed to banks have held the economy to a stranglehold, impeding real economic growth though policymakers are not admitting same. Since the financial crisis of 2008, corporate indebtedness has almost wiped out the assets of companies in the country.

The same is the case with the manufacturing sector, where the largest of these firms owe the banks and their debts have been taken over by AMCON. If AMCON decides to liquidate companies owing it and sell all their assets to recover its money, Nigeria will have no company in existence.

Take for instance the airline where only about three are flying now, if they are liquidated because of debt, the domestic airline industry will be dead in a day. If this happens, all the workers employed by these companies at the moment will add to the ever growing unemployment figure in the country.

Nigeria as a country has a domestic debt profile of above N6 trillion. This debt is being serviced at very high interest rate. Resources that should have been spent on other services are being channeled to paying interest on debts to banks.

The concern of economists today is the cost of servicing this huge debt. Nigeria has one of the highest interest rates in the developing world and if there are high levels of debt, then debt servicing will become very expensive. The Federal Government is attributing the rise in the nation’s debt profile to wage increase and the government’s intervention to curtail the impact of the global economic and financial crisis of 2008. This implies that the debt is for consumption and not for productive activities. This makes the matter worse for the economy.

Besides, the triple digit oil price which Nigeria has depended upon has encouraged development of U.S. shale oil, some of which now compete with OPEC’s crude. OPEC members had dismissed it as of little concern a year ago, but Nigeria’s Minister of Petroleum Resources, Diezani Alison-Madueke, has said it will have a major impact on Nigeria’s finances. Nigeria, along with Algeria, has already felt the heat from the U.S. oil boom, losing ground in its most lucrative export market and diverting sales to Asia.

Violence, unrest and investment hurdles are making Nigeria the weakest supply link, helping prop up oil prices to the benefit of the group’s strongmen led by Saudi Arabia.

Oil supply in Nigeria has been underperforming for some time and little if any growth is expected in the medium term. This development has pushed many Nigerians into ravaging poverty that has hit the nation. Recent official figures show that 112 million Nigerians live below poverty line on less than $1 or N160 a day.

Nigerians have come to the hard reality that the various government policies since 1980, have contributed to the rising level of poverty in the country despite claims that the economy has been growing. The poverty data released by the National Bureau of Statistics suggested that 112 million Nigerians are poor going by the economic situation in the country in 2011. While 100 million are in absolute poverty, 12.6 million are moderately poor.

The Nigeria Poverty Profile 2010 Report indicates that poverty and income inequality in Nigeria increased in 2004. In addition, NBS estimates that this trend may have increased further in 2011 if the potential positive impacts of several anti-poverty and employment generation intervention programmes are not taken into account, but this can only be ascertained at the conclusion of the 2011 survey. The rising trend of poverty in the country is a direct reflection of public policy failure in Nigeria.

In 1980, an estimated 27 per cent of Nigerians lived in poverty. By 1990, 70 per cent of the population had income of less than $1 a day, more than two-thirds of the Nigerian people are poor despite living in a country with vast potential wealth and the figure has risen since then. Poverty levels vary across the country, with the highest proportion of poor people in the northwest and the lowest in the southeast.

With rising national and corporate debt that has pushed several otherwise viable companies into receivership with AMCON, decline in crude oil production and high cost of servicing domestic debt, the nation’s economy is hanging on a debt cliff. It can fall off the cliff if immediate steps are not taken.
*Omoh Gabriel, Vanguard