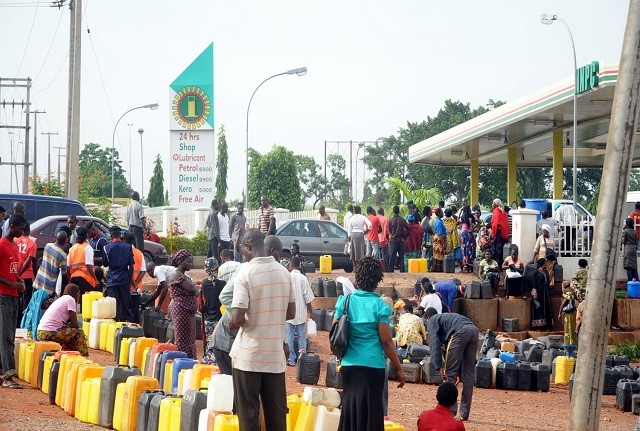 *Consumers queue up for fuel at an NNPC station

Lagos — Nigerian governors have made a recommendation for the increment of price of Premium Motor Spirit, PMS also known as petrol to N385 per litre, SweetcrudeReports has learnt.

During a virtual meeting by the Nigerian Governors’ Forum, NGF on Wednesday, all the 36 states governors, after considering a report of a committee headed by Kaduna State Governor, Mallam Nasir el-Rufai, accepted its recommendation that backs full deregulation of petrol, and suggested that pump price should be around N385 per litre.

If the new price is approved by the National Economic Council, NEC which intends to meet today, the Federal Account Allocation Committee, FAAC stands to gain between N1.3 trillion and N2. 2.3 trillion per annum.

Funds raised through the FAAC are usually shared monthly among the states and federal government, however, the Nigerian National Petroleum Committee, NNPC which is the largest contributor to the account had recently backed down from remittances.

The Nigeria Customs Service and the Federal Inland Revenue Service are also contributors into the FAAC.

The report by the 6-man committee also recommended that the federal government should buy 113 buses to be distributed among the states, to cushion the effects of the price increase.

According to a report by Thisday newspaper, the committee was set up early this year by the National Economic Council, NEC headed by Vice President Yemi Osinbajo to look into the falling revenues of states and make recommendations to the council.

Apart from el-Rufai, Governors Godwin Obaseki of Edo State, Kayode Fayemi of Ekiti State; and David Umahi of Ebonyi State are also members of the committee.

Other members of the committee are Governor of the Central Bank of Nigeria, CBN, Mr. Godwin Emefiele, and the Group Managing Director of the Nigerian National Petroleum Corporation, NNPC, Mallam Mele Kyari.

The four governors, who are members of the committee, presented its report to their colleagues, who endorsed it, although it is subject to final approval by NEC which will also meet today.

In a communiqué released after the meeting last night, the governors disclosed that el-Rufai gave a briefing on the appropriate pricing of petrol in Nigeria, where he called for full deregulation.

According to the communiqué, the Kaduna State governor further revealed that between N70 billion and N210 Billion is spent monthly to subsidise the petrol price at N162 per litre.

The committee identified Lagos, Oyo, Ogun, Rivers, and Abuja as the top consumers of petrol.

Presenting the report to his colleagues, el-Rufai reportedly said the increase in the price of petrol to N385 per litre would help stem the increasing smuggling of the product to neighbouring countries.
According to him, if petrol sells at N385 per litre, the Federal Account Allocation Committee, FAAC would gain between N1.3 trillion and N2. 2.3 trillion per annum.

Late last month, SweetcrudeReports had reported how NNPC in a document attached to a letter to the Accountant General of the Federation, dated April 26, and signed by the NNPC’s Chief Financial Officer, Umar Isa, explained how fuel subsidy had affected its contributions to FAAC.

Copies of the draft also sent to the Minister of Finance, Budget, and National Planning; the Director-General of the Nigeria Governors’ Forum; the Director, Home Finance; and the Chairman, Commissioners of Finance Forum explained that the net revenue to FAAC in April was N111.966bn. The NNPC value shortfall as a result of petrol subsidy was put at N111.966bn- no remittance to FAAC was listed.

According to the document, the NNPC stated that in January, February and March, the oil firm’s net revenue to FAAC after value loss were N96.86bn, N64.16bn, and N41.184bn respectively.