Lagos — In bid to boost the nation’s foreign exchange earnings, the Federal Government through the Nigerian Ports Authority, NPA has approved ten terminals across the country with a view to processing export cargoes.

Disclosing this in Lagos yesterday, NPA, its Managing Director, Mohammed Bello-Koko, said that about three of the approved terminals have commenced operation. 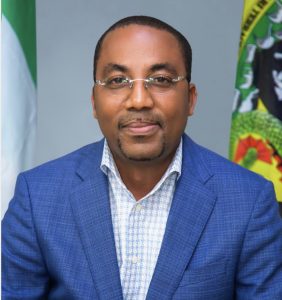 Bello-Koko also said that five of these export terminals are in Lagos, one in Ogun State and others in the other parts of the country.

“What we are doing here is to reduce cost to the exporters, reduce time that it takes to export these goods out, and then make the process faster and seamless actually.

“And out of the ten I think three or four are operating, there are awaiting, you know there ought to be a Nigeria Customs export desk at such locations. And every other federal government agency that is necessary to enable export should be at those terminals. And we have written to all the relevant government agencies to have presence at those locations.

“So, we have already taken that initiave before the CBN Governor came up with that initiave. And we also link up our exprt processing terminals to the DEW that is been created by the Nigeria Export Promotion Council, NEPC. Those ones are in the hinterland. Those the Domestic Export “Warehouse, DEW. And we link them up with those ones, we link them up with eight or so of the export processing terminals, so as to make it easier for the goods to come into the port.

“So, we have taken the initiatives, and yes we have listened to the CBN Governor. What he was asking for is a dedicated expert terminal, that means a terminal by the sea, with berth and others to take away vessels. It is something that is in the map, in the drawing but what we have done is to create something like that outside the port, and then we move it into the port. And we have encouraged all terminal operators to also have warehouses and necessary facilities for non-oil export

“We gave licenses to ten. exporting terminals and the essence is to first of all for exporters of agricultural products and natural mineral resources to be able to take their exports to those locations.

“These export products will be sorted, processed, tested, certified, containerized and sealed if need be and from there, the export product be taken directly into the port and onto the vessel.

What we are trying to do here is to reduce cost, time, and make the process faster for the exporters.

Lasst week, Chairman of the Nigerian Port Consultative Council, NPCC, Otunba Kunle Folarin said that the government is making every effort to grow the economy by encouraging exportation of Nigerian produced goods to other parts of the world so as these earning can come back to the country.