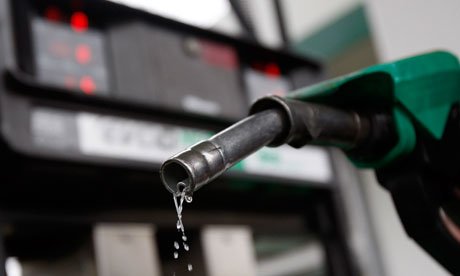 *Petrol dripping from a pump.

Kachikwu, who stated this at a workshop on harmonisation of Liquefied Petroleum Gas, LPG, regulatory requirements in Abuja, disclosed that the country has enough gas to meet the country’s needs and only needed to address challenges hindering the effective evacuation of the commodity.

He said, “We need to move away completely from the utilization of only PMS in the transport sector. It is creating a lot of under-recovery, over N1.4 trillion per annum to the Federal government. We need to begin to look into other components of cleaner fuels and rely less on PMS. It would be better for the country. It would eliminate fuel among others.

“What we have today is a lot of LPG produced by NLNG and the problem we have is how to evacuate them. Issues of infrastructure, issues of storage and transportation are there and also tariff issues; how to deploy empty cylinders and the kind of incentive scheme that would encourage people to move from using firewood and electrical stove to the use of LPG.

“There are safety issues whenever any issue of gas and LPG component is talked about, but these are issues that can be addressed. We need to move very rapidly, create the right incentives and encourage investments in infrastructure.”

He added that the government and stakeholders needed to find a way of providing enough incentives that would enable the private sector to invest in critical areas of the gas sector.

Also speaking, Ms. Brenda Ataga, Senior Adviser on downstream and infrastructure to the Minister of State for Petroleum Resources, stated that LPG adoption drive is critical to the Federal Government today, due to the rising environmental devastation that is recurring as well as over-dependence on one traditional fuel, which is gasoline.

She noted that the Federal Government had set a target of five million tonnes of LPG consumption within the next 10 years, noting that regulatory framework is very critical and forms the bedrock to build the foundation to deliver this project and execute it for the government.

“With our huge LPG production capability, I do not see any reasons while LPG is not affordable to the local consumers of LPG. We are looking at the domestic supply obligation that frames how much LPG is being brought to Nigeria and the commercial obligation as well as the pricing.”