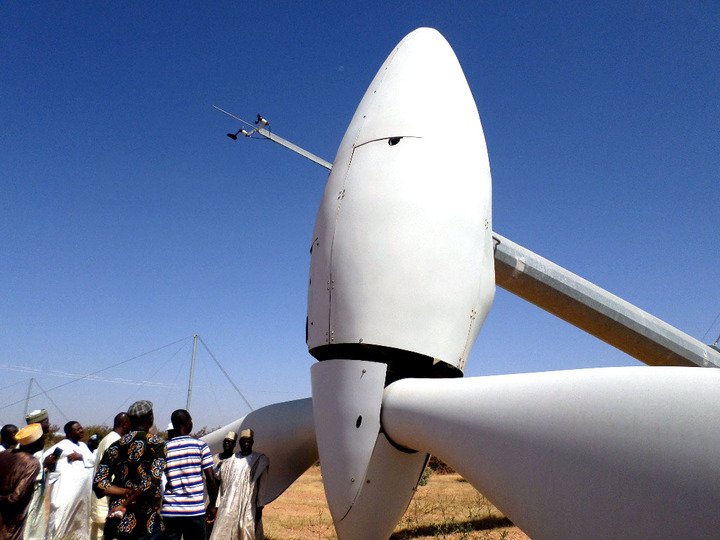 *People admiring one of the 37 turbines at the 10Mw Power Windmill project at Rimi, Katsina State.

12 March 2018, Sweetcrude, Lagos — The Federal Government has said it will concession the 10 megawatts Katsina wind farm.

This is contained in a document signed by the permanent secretary, Federal Ministry of Power, Works, and Housing, Mr. Louis Edozien, obtained by SweetcrudeReports. The move is in conjunction with the Transmission Company of Nigeria, TCN, on distribution expansion programme.

Titled ‘General Procurement Notice: Concessioning of the 10mw Katsina Wind Farm’, the ministry explained further that the concessioning of the wind farm located at Lambar Rimi also forms part of government’s strategy to increase generation capacity and enhance the reliability of the national grid.

Although the document did not tell how much the deal is worth, however, further details showed that the 37 – turbines, 10 MW wind farm will be concessioned alongside the associated, generation and distribution facilities and 200-hectare land it is situated on.

Regarding the reason why the government will be concessioning the plant, the ministry explained that it is to enable the uninterrupted power supply to “selected eligible customers” in the vicinity of the wind farm.

The excess generated power will then be sold to “a licensed distribution company at the Katsina Transmission Company of Nigeria (TCN) substation all under a power purchase agreement”, according to the document.