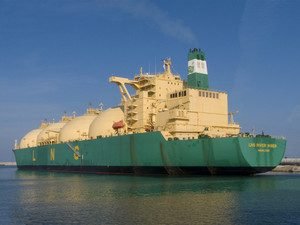 26 January 2017, Sweetcrude, Lagos – A cargo of liquefied natural gas loaded at the Nigerian LNG facility on Bonny Island is currently on its way to Portugal, LNG World News reports.

According to the shipping data provided by the port of Sines, LNG carrier LNG River Niger with the capacity to transport 141,000 cubic meters of the chilled fuel is scheduled to arrive at the REN’s Sines LNG terminal on January 31.

The vessel, built by the South Korean shipyard Hyundai Heavy Industries in 2006 is owned by a Nigeria LNG unit, Bonny Gas Transport (BGT), and is currently on its way in the Atlantic, off the coast of Liberia, AIS data provided by VesselsValue shows.

The export facility on Bonny Island has the capacity to produce 22 million tons of LNG per year while the Sines LNG terminal on Portugal’s Atlantic coast has the nominal capacity to handle 5.26 billion cubic meters per year.