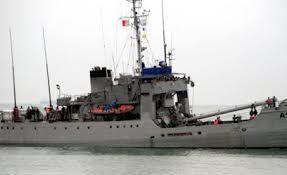 Parading the suspects allegedly engaged by the sponsors of the bunkering business within the Eastern waterways, the Commanding Officer of NNS Victory, Calabar, Commodore Kingdom Itoko, said the suspects were arrested between Igbani station and Parrot island with the products to be sold in Calabar.

Itoko noted that some persons were recently arrested over the illegal business within the Calabar area and were handed over to the Economic and Financial Crimes Commission, EFCC, for more investigations to unravel the sponsors.

He said that the navy will not relent in the bid to rid the Eastern maritime environment of criminal elements, stressing that bunkering was economic sabotage to the nation.