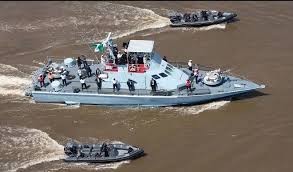 20 September 2018, Sweetcrude, Warri, Delta State — The Nigerian Navy has scored its effort high in the fight against oil theft in the Niger Delta, saying its Operation Tsare-Teku launched two years ago against maritime insecurity has helped in reducing incidents of crude oil theft in the region.

He said the swamp bogey operation which was also introduced in the anti-oil theft war and the choke point regime had brought crude oil theft to the lowest ebb.

Rear Admiral Garba said swamp bogeys were used to destroy facilities of oil thieves in the creeks, adding that security was mounted at areas identified as choke points in the waterways to stop illegal crude leaving the country.

He further advised oil thieves to engage in legitimate ventures, stressing that anyone caught would face the full weight of the law.

“As you know, crude oil theft and other such criminal activities have reduced as a result of a number of measures put in place, one of which is the permanent operation at sea, which is called Operation Tsare-Teku. Tsare-Teku maintains a number of vessels at sea at all times.

“The second one is the Swamp bogey operation, whereby we go around demolishing all illegal infrastructure that has been put in place for illegal oil production. The third one is the choke-point regime, in which we have our houseboats at strategic points within the inner waterways, which are the backwaters, ensuring there is no illegal movement of any kind of illegal products in that general area.

“We’ve been able to sustain these three and with them, we have been able to curtail the flow of illicit oil activities in our are of responsibility”, he said.