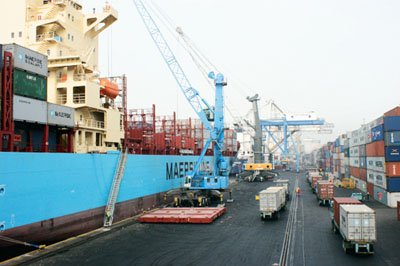 03 October 2018, Sweetcrude, Lagos — There are indications of a looming congestion at the Nigerian seaports as owing to a dearth of accommodation for cargo backlog following the three days warning strike embarked upon by the Nigerian Labour Congress (NLC).

The situation is worsened by the fact the call off of the industrial action coincided with the long weekend that culminated to a public holiday, today, Monday which may elongate the evacuation period of the cargo glut.

It was gathered that over the weekend, the nation’s seaports, especially the Lagos Ports Complex and Tin Can Island Ports Complex both in Apapa, which are the two biggest cargo seaports, have remained under lock and key for two consecutive days.

Besides, the Berthing Committee Meeting, which holds daily, Monday-Friday to allocate berths to vessels arriving the nation’s waters also failed to meet for the two days the strike lasted, which makes it very difficult for vessels to berth at any of the seaports.

However, it was gathered that some skeletal services were rendered by terminal operators at the nation’s seaports to de-congest their terminals.

In a press statement made available to journalists by the National Publicity Secretary of the Association of Nigerian Licenced Customs Agents (ANLCA), Joe Sanni before the strike was called off; he disclosed that some terminals have begun skeletal operations at some terminals at the western port.

He said, “Clearing agents are to take advantage of the Independence Day, plus Saturday and Sunday to at least take deliveries of already Customs-released containers.

There are established facts that at least, some skeletal services are being rendered at TICT, where the Terminal Manager has been validating Terminal Delivery Order’s (TDOs) to enable loading of containers to exit the Ports. But, for any revalidation to be done, which will go on till October 1st, the Shipping Delivery Order has to be valid.”

However, it was confirmed that no Customs examinations took place during the strike period at terminals across the country and other Customs formations.

“As much as this development is welcomed, particularly for cargoes that had been released by Customs, the fact remains that with the ongoing nationwide strike by NLC, it will be difficult to have a full complement of relevant stakeholders in the ports, to take full advantage of the situation.

“If your container is ready for exiting and your transporter can maneuver through the heavy cluster of trucks on the access roads, and get into the Terminal, loadings will be done on Saturday, Sunday and Monday, with TDO.”

Moreover, a source at the Nigeria Customs Service also disclosed that officers and men at the various commands of the service, especially those in Lagos were prevented from accessing their offices during the period as the Customs Processing Centres CPCs of the various commands, have been under lock and key, thus making it impossible to process documents for cargo release.

The source said: “Even if any officer sneaks into the ports, the agents would not be available to present their documents because the banks were not opened for fear of being attacked by the monitoring teams of the labour unions.

The situation is made even more difficult by the fact that no truck owner or fleet manager would release his truck to lift cargo at the ports because they may be vandalised with the possibility of risking the safety of the driver and the cargo itself.”

On the possible effects of the strike action on the port operation, he observed that there would likely be a backlog, which might take some time to clear, which more often than not leads to congestion, having already lost two working days before the strike was called off.