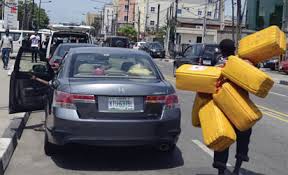 In search of fuel in Lagos, Nigeria.

23 May 2015, Lagos – Nigeria, Africa’s leading oil producer, on Thursday warned that jobs could be at risk, as a weeks-long fuel crisis showed no signs of easing. Long queues have been seen for days outside filling stations, flights have been grounded and generators that kick in when the country’s patchy public electricity supply goes off have run silent, leaving many without power.

“Many companies have shut down because they cannot get diesel to fuel their plants,” Musa Yusuf, of the Lagos Chamber of Commerce and Industry, told AFP.
“Unless the situation is redressed, companies may be forced to lay off (staff).”
Addressing the crisis looks likely to be the first major task for incoming president Muhammadu Buhari, who takes office next Friday.

– Empty tanks –
Nigerian motorists have borne the brunt of the shortages, with long queues at petrol stations in major cities such as Lagos, the capital Abuja, the oil-producing hub of Port Harcourt and Kano in the north.
Drivers in Lagos have increasingly abandoned their cars, easing the megacity’s notorious traffic gridlock, but more than doubling prices for commuters on public transport on many routes.
Black market and legitimate petrol vendors were doing a brisk trade, selling at about 300 naira (150 US cents, 70 euro cents) a litre — well above the official price of 87 naira.
“I have been at this (filling) station since yesterday (Wednesday),” said Rasaq Olamitoye on Awolowo Road, the main thoroughfare in the upmarket suburb of Ikoyi island.
“I had to sleep in the car because I don’t have enough fuel to drive out of the queue. There is no hope as the station is not selling.”

At one filling station, motorists and young men with jerrycans jostled to buy supplies.
“It is a shame that an oil-producing nation like Nigeria is going through all this hardship,” said one motorist, who refused to give his name.
At Lagos domestic airport on Thursday morning, passengers were told all flights were delayed because there was no aviation fuel.
“It is not even clear if the fuel tanker is in the airport,” one airport worker said. “They delay each flight for 50 minutes each flight and then review.”

– Subsidies –
Nigeria produces some two million barrels of crude oil a day but despite its huge reserves, it imports much of its fuel due to a lack of refining capability — a situation blamed on corruption and mismanagement.
To make fuel affordable, Nigeria has frozen the price of a litre of petrol at 87 naira, lower than the market rate. Fuel importers expect subsidy payments from the government to make up the difference.

When the government does not pay, fuel runs scarce, frequently causing gridlock and panic.
But the subsidy programme has been found to be rife with corruption, including false claims and overpayments.
In January 2012, the government tried to end the fuel subsidies, causing petrol prices to more than double.
But it was forced to partially reinstate them after tens of thousands of people took to the streets in violent protests that left more than a dozen dead.

– Indefinite strike –
Unions say the crisis has arisen because the cash-strapped Nigerian government — hit by the global slump in oil prices — owes 200 billion naira in outstanding subsidies to oil importers and marketeers.
Last month, outgoing Finance Minister Ngozi Okonjo-Iweala said fuel importers were paid 156 billion naira.
But fuel depots have been shut until the debt is paid in full, preventing truck drivers from filling up their tankers with petrol since last week and distributing it for sale.

At the same time, unions are angry at the sale by the Nigerian Petroleum Development Company — the upstream subsidiary of the state-run oil firm — of two oil-producing fields to private investors.
Unions claim the sale did not follow due process and want it reversed.

“Right now, there have been no serious efforts by government to address the two issues and so the scarcity will persist,” said Tokunbo Korodo, from the National Union of Petroleum and Natural Gas Workers (NUPENG).
Babatunde Oke, spokesman for the white collar oil workers union PENGASSAN, said indefinite strike action would disrupt production at the disputed oil-producing fields.

Neconde Energy Limited, the private operator of one of the blocks, said it had not acted illegally in buying a 45 percent stake in the block and the remaining 55 percent shares were still held by government.