Newswire — An oil pipeline capable of hauling 180,000 barrels a day across Nigeria has ceased transporting crude since mid-June due to theft, according to a person familiar with the information.

The Trans-Niger Pipeline, TNP, has yet to be formally shut, said the person who declined to be identified because the information isn’t public. The link’s capacity is about 15% of Nigeria’s most recent average daily output, according to Bloomberg calculations. 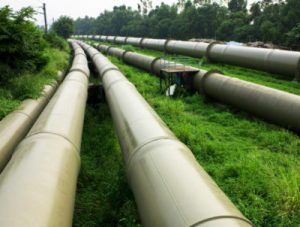 Nigeria — Africa’s largest oil producer and a member of the Organization of Petroleum Exporting Countries — has tried to stamp out sabotage on its pipeline network in recent years. Oil theft remains a chronic problem for the midstream system known as the TNP.

Producers received as little as 5% of crude volumes pumped through the pipeline between October 2021 and February, an industry union reported earlier this year. It reflects a larger issue for Nigeria, which is facing shrinking investment and hasn’t been able to meet its OPEC+ oil-production quota in order to benefit from a surge in prices.

The TNP was illegally tapped in about 150 places, the Petroleum and Natural Gas Senior Staff Association of Nigeria said in March when local government checked some of the areas where the theft occurred.