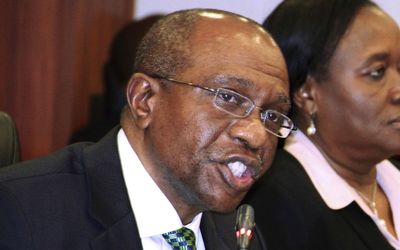 Emefiele, who gave this forecast at the annual bankers’ dinner of the Chartered Institute of Bankers of Nigeria (CIBN), said the reserves would continue to grow as they “have recovered significantly from just over $23 billion in October 2016 to over $34.3 billion as of November 3, 2017.”

In his address entitled, “Policy Options for Sustaining Nigeria’s Economic Upturn”, Emefiele updated the gathering on the economy, the apex bank’s efforts on the macroeconomic and financial policies, as well as outlook for the coming year.

Looking into the future, he said, “if we remain resolute with our efforts, policies and actions, we can attain a foreign exchange (forex) reserves position of about $40 billion by end 2018.”

He said, “The accretion in reserves does not only reflect increased inflow but also our shrewd forex demand management strategy. When we introduced a policy restricting 41 items from our forex markets, we were called all manner of names.

“Today, among the benefits of that policy is the considerable decline in our import bills. From an average of about $5.5 billion, our monthly import bill has fallen consistently to $2.1 billion in 2016 and $1.9 billion by half year 2017.

“For one, our import bill may have fallen but our manufacturing and agriculture sectors still have a long way to go if we must attain self-sufficiency in those sectors. To date, the bank has committed close to N45.5 billion under the Anchor Borrowers’ Programme (ABP) with active participation across 30 states of the federation.”

The CBN chief said he expects that the exchange rate will not only be stable but would begin to appreciate against major currencies. “The adverse competitiveness outcome, which such appreciation may entail would be adequately mitigated by proactive policies to ensure that our balance of payments position is not undermined.”

Emefiele also attributed Nigeria’s recent improvement in the ease of doing business indicators, partly to the introduction of the I&E forex window, which, he said, boosted investors’ confidence and eased market sentiments.

“The World Bank’s Ease of Doing Business indicator for 2018 showed that Nigeria, with a score of 52.03, improved 24 places to rank 145 out of 190, standing above the regional average score of 50.43 recorded for sub-Saharan Africa. I must note that the CBN efforts reinforced the presidential initiatives to improve ease of doing business in Nigeria.

“The establishment, nurturing and administration of the Credit Bureau and the National Collateral Registry contributed in no small measure at improvement of access to credit and enhancing the ease of doing business in Nigeria. In addition, the introduction of the transparent I&E Forex Window, which boosted investors’ confidence and eased market sentiments also buoyed our doing business indicator,” he added.