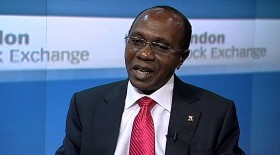 Announcing this after the 96th session of the Monetary Policy Committee (MPC) meeting in Abuja, the apex bank governor, Mr. Godwin Emefiele, attributed the development mainly to the increased accretion and moderation in the rate of depletion.

This was even as Emefiele’s debut MPC retained the Monetary Policy Rate (MPR) at 12 per cent with a corridor of +/- 200 basis points around the midpoint; the liquidity ratio at 30 per cent; the public sector Cash Reserve Requirement (CRR) at 75.0 per cent; and the private sector CRR at 15.0 per cent.

The CBN governor said the Committee expressed satisfaction with the relative stability in the nation’s macro-economic development as reflected in the impressive growth rates, stable consumer prices and exchange rate as well as increased external reserves, worrying, however, about the weak translation of stability to micro-economic gains in employment and access to finance, especially by Small and Medium Enterprises (SMEs).

He stated that, following this, the Committee emphasised the need for the MPC decisions to take into account the long-run impact on employment level, wealth creation and growth of businesses.

On monetary, credit and financial markets’ developments, the CBN governor said broad money (M2) rose by 1.66 per cent in June 2014 over the level at end-December 2013, indicating an annualised growth rate of 3.31 per cent.

“The annualised growth rate was considerably lower than the growth benchmark of 15.52 per cent for fiscal 2014, but for the same period, net domestic credit increased by 0.88 per cent compared with the growth rate of 15.39 per cent over the corresponding period of 2013.

“When annualised, net domestic credit rose by 1.77 per cent, compared with the growth benchmark of 28.5 per cent for fiscal 2014. The expansion in aggregate domestic credit was mainly due to the increase in claims on the private sector which increased by 2.75 per cent in June 2014, which was, however, moderated by the contraction in net credit to government,” he stressed.

Emefiele said that money market rates remained within the MPR corridor during the review period, even as the monthly weighted average OBB rate was 10.38 per cent in May 2014, but increased by 14 basis points to 10.52 per cent in June.

According to him, the uncollaterised overnight rate was 10.50 per cent in June 2014, compared with 10.63 per cent in May 2014, and overall, both the OBB and overnight call rates were trading closer to the lower bound of the MPR corridor on account of liquidity surfeit in the banking system.

He said activities in the capital market were bullish during the period with the All-Share Index (ASI) increasing by 2.8 per cent from 41,329.19 at end-December 2013 to 42,482.48 at end-June 2014, just as market capitalisation also moved in the same direction.

Speaking on external sector developments, he noted that all the segments of the foreign exchange market witnessed a considerable degree of stability during the period, even as the exchange rate at the retail-Dutch Auction segment (rDAS) of the market was flat at N157.29/US$ in the review period, while, at the inter-bank market, the selling rate opened at N162.20/US$ and closed at N162.95, representing a depreciation of N0.75 or 0.46 per cent.

“Gross official reserves rose to US$40.20 billion by 18 July from US$37.31 billion at end-June 2014. The increase in reserves was mainly due to increased accretion and moderation in the rate of depletion,” he emphasised.

He pointed out that based on this the National Bureau of Statistics’ (NBS) revised reported growth numbers from 2010 to 2013 and the first quarter of 2014, as part of the GDP rebasing exercise. He, however, stated  that while the  committee welcomed the impressive growth performance, it noted that the country had the potential to do better with appropriate supportive macroeconomic policies, stressing the imperatives for monetary policy to sustain efforts aimed at supporting non-inflationary growth in key sectors of the economy.

“The Committee also emphasised the need for government to sustain and deepen tax revenue and enhance efforts aimed at fast-tracking the structural transformation of the economy, with a view to making it resilient to adverse shocks as well as creating the necessary platforms for reducing unemployment, income inequality, and poverty in the country,” he stated.

Speaking on the Committee’s various concerns, Emefiele said though it was satisfied with the relative stability in the macro-economy as reflected in the impressive growth rates, stable consumer prices and exchange rate as well as increased external reserves, it was, however, concerned about the weak translation of stability to microeconomic gains in employment and access to finance especially by small and medium scale businesses, emphasising the need for the MPC decisions to take into account the long run impact on employment level, wealth creation and growth of businesses.

According to him, the Committee, again, noted the potential of the power sector to stimulate output growth through enhanced investment and the spill-over effect in employment generation if the challenges confronting the sector are effectively and appropriately addressed, noting, however, that gas-to-power has remained a binding constraint in reaping the benefits of the recently-concluded power sector reforms.

“Other pressure points include the underlying pressure from food/core inflation and the risks that could emanate from the likely increase in aggregate spending in the run up to the 2015 general elections.

“The Committee was also concerned about the implications of the on-going QE3 tapering for inflows and external reserves, but recognised the necessity of sustaining a stable naira exchange even as it has to deal with the delicate balancing of the need for a low interest rate regime.

Additionally, the Committee expressed concern about the liquidity level and the trending uptick in inflation which may not be unconnected with the poor harvest in some agricultural producing areas, particularly in the north eastern and central states of the country, noting that other reform measures could dampen food prices in the short to medium-term and restore inflation to a sustainable long-run path.