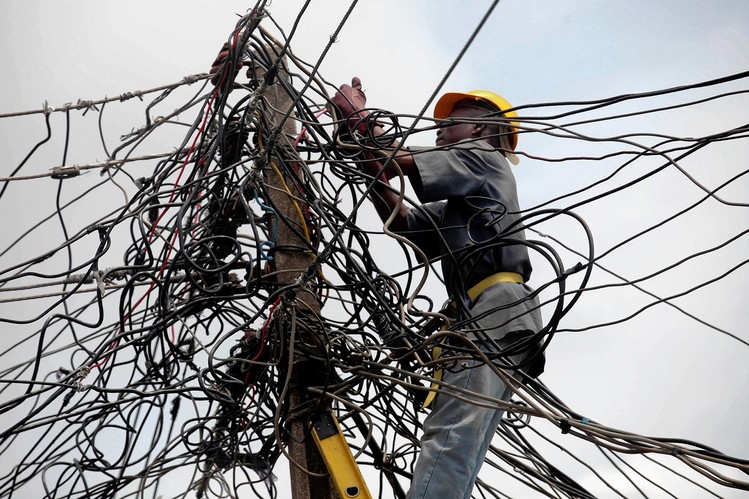 *Power distribution lines for both metered and unmetered consumers.

Lagos — Officially privatised on November 1, 2013, Nigeria’s power sector sold into the hands of independent investors clocked eight exactly this year’s November 1. It would be recalled that grand promises were made by the investors as at time of privatization- most having a 5-year target period of delivery; however, the investors are now singing a new song of “impossibility”, most of which had require several financial interventions by the federal government, World Bank, the African Development Bank, and the Central Bank of Nigeria, CBN.

Eight years on, yet, the sector isn’t getting it right, as many challenges currently plague its attainment of atleast a minimal level of breakthrough.

A professor at the University of Lagos, Yemi Oke, had insisted that from privatisation till date, just 500megawatts, MW had been added to the national grid and transmitted despite marketing hypes from investors.

Incessant drop in power production/supply
Low power generation and supply continues to plague the sector despite promises to make the issue a thing of the past.

One of the instances was last Sunday, when power generation dropped from a peak of 4,224.9MW to 3,844.3MW by 6am on Monday, according to data obtained from the Federal Ministry of Power show.

Power generation of not up to 5000MW is too meager to conveniently serve a country with over 200 million population. Experts say for the country to attain sufficiency, power generation of atleast 30,000MW is required.

SweetcrudeReports recalled that operators publicly 3, 400MW as at time of privatization, with lofty promises to ramp up generation and supply, yet, the sector still battles same menace even after trillions of naira investments in generation, transmission, and distribution.

The Executive Secretary, Association of Power Generation Companies, Joy Ogaji, had recently in Abuja lamented over the power situation in Nigeria, saying, “at privatisation on November 1, 2021, power was slightly above 3,400MW.”

The former power minister, Babatunde Fashola had boasted of an increased power generation from 5000MW to 9000MW, however adding, that the sector lacked adequate transmission and distribution capacity to evacuate everything out to consumers

The installed generation capacity at the Gencos’ power stations is about 13,427MW.

Metering gap
In a bid to close the metering gap, the Meter Assets Providers, MAPs regulation was introduced by the Nigerian Electricity Regulator, NERC in 2018.

However, just a little above 200, 000 meters were distributed by the eleven DisCos up until 2020 when the federal government intervened with funding of a first phase of 1, 000, 000 meter distribution under the National Mass Metering Programme, NMMP.

According to the Association of Nigerian Electricity Distributors, ANED, the number of registered customers in the industry rose above 10 million in the first quarter of 2021.

“However, only 41.1 percent of the customers are metered due to the historical deficit of metering at NESI. The National Mass Metering Programme introduced in October 2020 aims to reduce the metering gap,” it said.

Power plants
As of July this year, Executive Secretary, Association of Power Generation Companies, Dr Joy Ogaji, said the 25 plants operating in Nigeria had witnessed a reduction in their cumulative available generation capacity due to challenges.

She said, “The 25 plants that are currently operating have a combined installed capacity of over 13,000MW and they have an available capacity, which has dropped.

The APGC executive secretary stated that only 25 firms were generating electricity in Nigeria out of the over 160 licensees who were issued licences by the Nigerian Electricity Regulatory Commission to produce power.

“There are 124 power generation companies, majorly thermals – firms that use gas, that are just watching on the sideline, watching when the market gets serious before coming in,” Ogaji had stated.

Eligible customer regulation brouhaha
The Federal Government had introduced the Eligible Customer Regulation in 2017 allowing Gencos to sell electricity directly to customers that consume over two megawatts of electricity.

However, DisCos had only this year, argued that sale of electricity by power generation companies directly to some customers for about four years was illegal

NERC then ordered TCN to suspend the bilateral electricity trade on the grounds that such customers had yet to meet certain requirements.

It stated that such requirements included the requisite energy demand of the customers, proof of excess capacity by the Gencos to supply the energy, payment of requisite charges and fees to exit conventional network and getting eligible status from the NERC.

Although NERC later denied out rightly suspending the Regulation, however, sources had hinted SweetcrudeReports; that the DisCos had in actual sense, called for its scrapping

Funding/liquidity challenges
Federal government alongside the CBN have also at various times made funding available to the three tiers; DisCos, GenCos and TCN. However, despite government funding, the sector keeps crying foul of under-recovery, funding gaps, and other financial woes- all tied to their reasons behind inability to deliver on their original promises at privatisation.

Power generation companies in Nigeria said they suffered a loss of N1.66tn in seven years as a result of non-payment for deemed capacity.

The DisCos said a total of N97bn was lost in the first quarter of this year to energy theft, capping of estimated billing and other factors.

According to the Association of Nigerian Electricity Distributors, ANED, the umbrella body for 10 of the 11 Discos in the country, said the amount lost by the power firms rose by 12.79 per cent in Q1 2021 from N86bn in Q4 2020.

A recent report had chronicled how the revenue collected by power distribution companies rose by 42.3 per cent in the first quarter of this year, compared to the same period of 2020, buoyed by the hike in electricity tariff.

The group said the Discos’ overall aggregate technical, commercial and collection loss had continued to deteriorate as it rose to 50.3 percent in March this year from 48.5 percent at the end of last year.

“Since the capping of estimated billing regulation was approved (February 2020), the ATC losses are higher and continue to increase. The ATC losses is now at 25.5 percent and it has grown from 17.7 percent, most likely because of the regulation,” according to ANED.

Consumer apathy
Consumers agitation continues to build up especially against the DisCos who happens to be at the direct fore of interfacing with electricity consumers across the country.

For instance, residents on the Graceland Estate, Oba Ile, in the Akure North Local Government Area of Ondo State, trooped out on Monday to protest against estimated billing by the Benin Electricity Distribution Company.

Estimated billing
Just as protests over estimated keeps spreading across the country, a pressure group under the aegis of ‘Light up Movement’ recently demanded an end to estimated billing by the Abuja Electricity Distribution Company in Kogi State.

The chairman of the group, Illiyasu Zakari, who addressed a press conference in Lokoja also said no customer of AEDC in the state should be placed below Band ‘C’ Tariff Migration.

The national electricity grid in the past eight years has collapsed more than 130 times despite over $1.6 billion investment on transmission and borrowings from the World Bank and the African Development Bank.

In the past eight years, the Federal Government had spent about N1.7 trillion on the sector with plans to spend additional $3 billion.

Despite huge amount spent, the new Power Minister, Aliyu had admitted on the backdrop of increased tariff in electricity; that the quality of service in terms of hours of supply, voltage, disputed/estimated bills, or having no access to electricity, remained poor.

In conclusion, statistics from Nigerian Bulk Electricity Trading, NBET Plc had shown that an average of N720 billion worth of electricity bill is processed yearly in the country, bringing the cost to about N5.7 trillion in the last eight years.