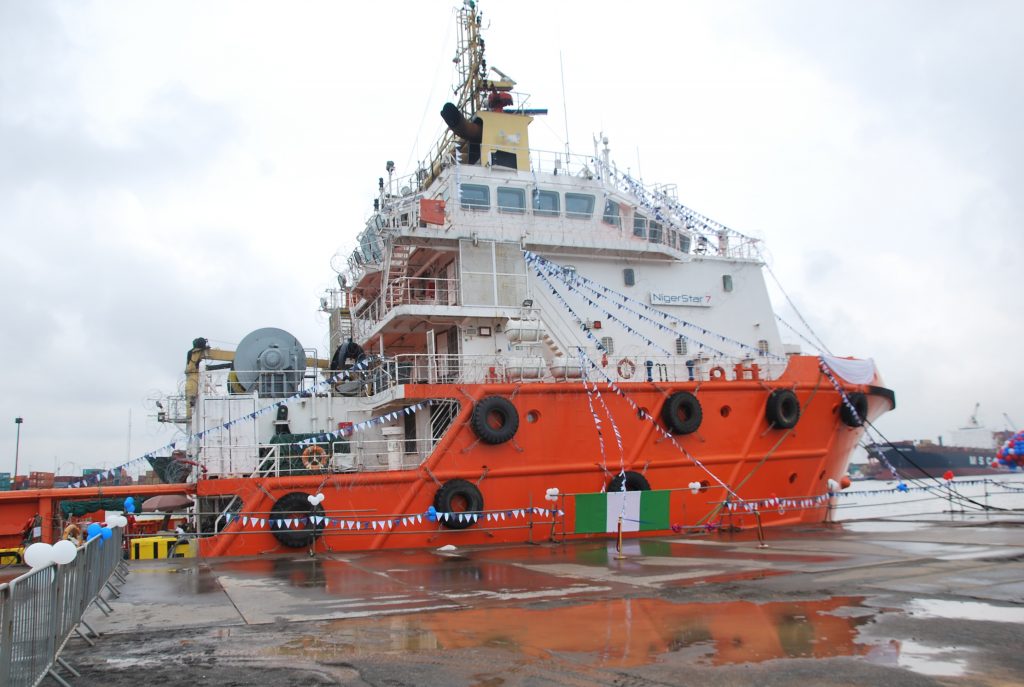 24 September 2018, Sweetcrude, Lagos — NigerStar 7 has officially renamed and launched its newly acquired vessel. The new vessel which has been named NigerStar 7 Adaba will boost capability in the maritime segment of the oil and gas industry.

The vessel – a DP2 Anchor Handler (140 metric tonnes bollard pull, owned by a Nigerian company and operating in Nigerian waters – has a 52-passenger-on-board accommodation capacity. It has 460 square meters deck space and an Electronic Fuel Monitoring System.

It is the first of its kind to explore Nigerian waters and has been hailed as a major complement to the local content policy of the Federal government.

Speaking at the renaming ceremony at Nigerdock Shipyard on Lagos Island in Lagos, NigerStar 7’s Chief Executive Officer, Mr. Yann Cottart, said: “Our mission is to serve Nigeria’s offshore oil and gas industry by executing the largest and most complex EPCI deep-water projects, and today with this new addition to our fleet, we are closer to our goal as we become the only Nigerian Tier 1 EPCI contractor with a number of modern assets 100% owned and positioned in the country.

“With this investment, NigerStar 7 is creating employment opportunities for marine personnel, our teams onshore and contractors/suppliers providing support services to our vessel,”.

On his part, the Executive Secretary of the Nigerian Content Development and Monitoring Board, NCDMB, Engr. Simbi Wabote, extolled the partnership between NigerStar 7 and Nigerdock Shipyard while calling for more collaborations that can deliver on the goal of growing local content in the maritime, oil and gas industry.

According to Wabote, “we must commend NigerStar 7 for its renewed commitment to local content practice and the noticeable repositioning it has undertaken to project the value proposition it offers as an oil and gas service provider of high repute.”

He commended NigerStar 7 for its commitment to Nigeria and called on other companies to emulate the example of the company in terms of making a visible investment in the Nigerian economy.

In accordance with NigerStar 7’s commitment to the Nigerian Oil and Gas Industry Content Development Act of 2010, the personnel, crew on NigerStar 7 Adaba, including its Captain are Nigerians.

Also speaking at the event, the vessel’s godmother, Mrs. Olapeju Adenuga, who is also the company’s Legal Counsel said, “the name of our beloved vessel originates from its new habitat, Nigeria. Adaba emanates from the native Yoruba language of the western people of Nigeria and refers to the bird, Dove. The dove is symbolic as an embodiment of hope, reliability, guidance, and loyalty. The sturdy bird also characterizes the strong build of our vessel.”

The ceremony was attended by key players in the oil and gas industry, traditional rulers and representatives of government agencies. Some of the dignitaries present include the Chairman of Jagal Group, Mr. Anwar Jarmakani, representatives of International Oil Companies including ExxonMobil, Total and Chevron, a representative of the Director General of Nigerian Maritime Administration and Safety Agency, NIMASA and the Commissioner for Transportation, Lagos State, Mr. Ladi Lawanson.