NIMASA charges Nigerians on sustainable use of ocean resources 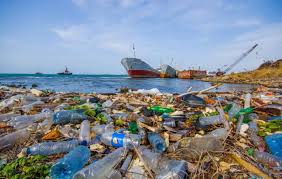 25 April 2018, Sweetcrude, Lagos – The Nigerian Maritime Administration and Safety Agency (NIMASA) has charged Nigerians on the sustainable use of the ocean resources, noting  that many activities were dependent on the ocean, hence the need to ensure it is clean and properly utilised.
As a result, NIMASA has inaugurated marine litter marshals to assist it in ridding the oceans of unwanted waste materials that could cause environmental degradation and also impede safety of navigation on the nation’s territorial waters.
Director General of NIMASA, Dr. Dakuku Peterside, stated this  during the flag-off ceremony held at the Nigerian Maritime Resource Development Centre in Lagos.
The director general said, “The state of health of the ocean is related to the state of our health and our economy; therefore we must stop indiscriminate dumping of materials in our ocean”.
He further stated that marine litter directly impacts on ocean life, marine habitats, human health, and navigational safety with potential impacts on socio-economic development of nations.
Also speaking at the evenT, a marine environment expert and the President of the Waste Management Society of Nigeria, Professor Osinbajo Oladele, applauded the initiative and described NIMASA as a beacon of hope to the rest of Africa. He said there is the need to preserve the oceans as they hold a lot of opportunities in developing the nation.
It may be recalled that the Convention on the Prevention of Marine Pollution by Dumping of Wastes and Other Matter 1972, commonly called the “London Convention” and also abbreviated as Marine Dumping, is an agreement to control pollution of the sea by dumping and to encourage regional agreements supplementary to the Convention. It covers the deliberate disposal at sea of wastes or other matter from vessels, aircraft, and platforms.