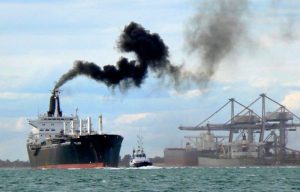 Lagos — The Nigerian Maritime Administration and Safety Agency, NIMASA has commenced the process to end gas emission from vessels within Nigerian territorial waters.

The process kicked off when the agency installed Thorium-X tablet in a ceremony earlier in the months.

The pilot project, which came as fallout of the Maritime Technology Cooperation Centre (MTCC) conference held in Kenya in March, aims at reducing fuel consumption by vessels. The MTCC is targeted towards developing countries, and Nigeria was made a priority and nominated for the pilot project.

The Director-General of NIMASA, Dr. Dakuku Peterside, speaking at the installation ceremony, reiterated the Agency’s commitment to global best practices in the execution of its mandate of regulating the maritime industry.

Dakuku, who was represented by the Head of the Marine Environment Management (MEM) Unit at NIMASA, Dr (Mrs.) Felicia Mogo, stated, “NIMASA is ensuring that we are keeping to global best practices with a commendable track record in administration and regulation in the maritime sector.

“NIMASA was chosen to lead the project in Nigeria, being the chosen country in the West and Central Africa region. This pilot project will last a year. But the data will be reported to the Kenyan portal, then it goes to the IMO global portal after every voyage.

“Reports will be collated and sent after a three-month period. The findings and analysis are then recorded and reported at the end of the year to inform the country the amount of fuel being consumed annually on each voyage and how much GHG is being emitted.”

The launch of the fuel consumption data collection device is in line with the decision of the International Maritime Organisation (IMO) to reduce fuel consumption by vessels as well as Green House Gases (GHG) and Carbon Dioxide (CO2) emission on voyages. NIMASA was nominated to operate the project in Nigeria, which has become a focal point and so nominated as a country of interest in Africa for the pilot project.

Representing Sea Transport Limited, owners of MT KINGIS, Musa Ado Ibn-Saidu expressed delight in being a part of the landmark installation initiative. Ibn-Saidu said the crew of the vessel were keen to use the tablet. He thanked the NIMASA MEM team for the requisite training provided the crew members on the operation and usage of the installed Thorium-X tablet, stating that they are appreciative of the efforts the Agency is making to reduce GHG emissions and save the climate.

The NIMASA-nominated vessel for the programme is indigenously owned by an award-winning company, Sea Transport Services Nigeria Limited. Nigeria was chosen for the launch of the pilot scheme for the West and Central Africa sub-regions.

The tablet is equipped with inbuilt internet capability for ease of communication of data, and also a dedicated software to calculate Energy Efficiency Operation Index (EEOI) of voyaging vessels. The information that results from the findings will facilitate decisions in maritime policy formation as it relates to GHG emissions from ships and its effect on climate and environment.

The Marine Environment Management unit of NIMASA has been at the forefront of efforts to ensure an environmentally safer and cleaner maritime domain.

It would be recalled that about a month ago, the Agency announced its collaboration with the National Oil spill Detection and Response Agency (NOSDRA) by signing a Memorandum of Understanding (MoU) on marine oil spill incident management, which is also in line with IMO requirements. These initiatives collectively stand to give Nigeria added global recognition on issues of marine environment management and climate change.