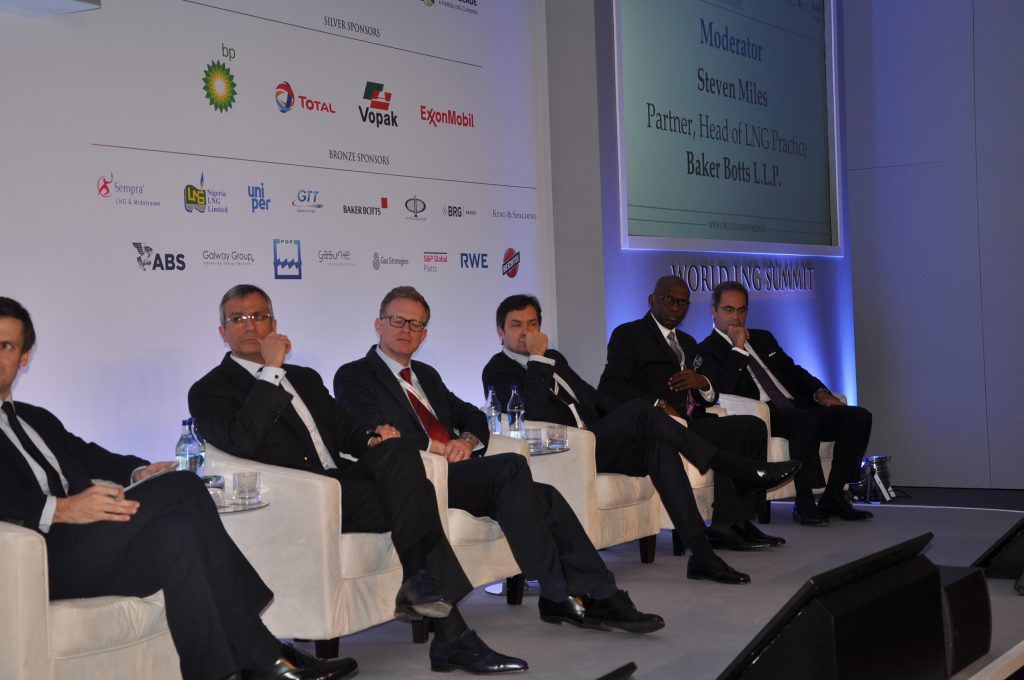 *Tony Attah, Managing Director of the NLNG participating on panel discussion at the World LNG Summit.

01 December 2017, Sweetcrude, Lagos — The Nigeria LNG Limited, has announced that the company, with the support of its Board, is making steady progress towards achieving Final Investment Decision (FID) on its Train 7 Plus (7+) project in 2018.

On completion of Train 7+, NLNG annual production capacity is expected to scale up from the current capacity of 22 mtpa to 30 mtpa.

Mr. Attah said: “With Nigeria’s proven reserves of about 192 trillion cubic feet of natural gas, and another 600 trillion cubic feet in potential, this milestone development is coming at a crucial time. I am excited about this development which would not be possible without the support of our Board and shareholders, the shared vision within our company of helping to build a better Nigeria; our core values of Integrity, Teamwork, Respect, Excellence and Caring; the commitment of our staff; and the cooperation from Government and other stakeholders including our loyal customers.

“This milestone would symbolise many things. We have consistently shown the world that NLNG is a world-class company, operating out of a globally strategic country, safely and reliably delivering clean energy to its customers. Secondly, and most importantly for Nigeria, it shows that it is time for gas; This is the time to unleash the country’s gas potentials through catalysts like Trains 7 Plus to spur socio-economic transformation.

“NLNG remains a success and we are determined to sustain our status as an inspiration to Nigeria. The company has generated $90 billion in revenues as well as paid $5.5 billion in taxes to the government. The company has also has helped monetise the country’s gas resources and significantly contributed to reducing gas flaring from 65% to less than 20%.”

The company has so far converted over five trillion cubic feet of associated gas, which otherwise would have been flared, to liquefied natural gas (LNG) and natural gas liquids (NGLs) for both export and domestic use. It is Nigeria’s most significant natural gas utilization intervention to date, which is helping to preserve the environment and support Nigeria’s economic growth.

From an initial investment of about $6 billion, NLNG has grown into a $15.6 billion investment with an asset base of about $11billion.

At a stage in its transition from a 2 (two) train facility to its current 6 (six) train structure, the NLNG facility was recognised as one of the fastest growing such projects in the LNG world as well as supplier of about 13% of global market supply.

Currently, NLNG is serviced by a committed fleet of 23 LNG vessels which is the largest fleet in the sub-region. This is inclusive of six new vessels, constructed in South Korea and delivered between 2015 and 2016 as replacements for six maturing vessels within its operations inventory.

In addition, NLNG has contributed significantly to the domestic LPG industry, supplying some 40% of cooking gas to Nigerian homes and businesses. This intervention continues as part of strategies and initiatives.

All these have been achieved with a management staff entirely made up of Nigerians and a workforce which is 95% indigenous.

Through its social investment programme on which some $200 million has so far been spent, NLNG is helping to improve lives in its immediate environment on Bonny Island and elsewhere across Nigeria.

The company recently flagged off a road project in collaboration with the Nigerian Government to construct a $392 million 34 kilometre road which will connect several communities in the mainland of Nigeria’s Niger-Delta region to Bonny Island, which was hitherto only accessible by sea. The project was formally flagged off by Nigeria’s Vice President, Professor Yemi Osinbajo, and is the biggest CSR initiative ever by a private company in the country.

Furthermore, NLNG has also recently signed a Memorandum of Understanding with the Bonny Kingdom for the economic development of the Kingdom over a 25-year period. In that MOU, NLNG committed N3 billion per annum, cumulatively more than $245 million in 25 years to the Bonny community. This will also increase the number of direct and indirect jobs and improve the quality of life on the island.