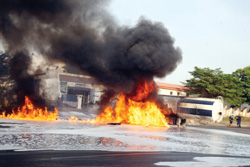 According to reports, a tanker dispensing fuel and a car  were destroyed in the inferno.

Less than two weeks ago, over eight people lost their lives during the gas plant explosion in the town.

No life was, however, lost in the inferno.

The fire according to an eye witness was said to have started around 6:20am, and would have been controlled with the timely arrival of fire fighters.