…As Baru says fuel scarcity now thing of the past 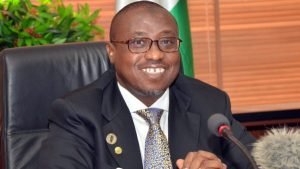 Princewill Demian
02 March 2018, Sweetcrude, Abuja – The Nigerian National Petroleum Corporation (NNPC) has expressed its commitment towards providing the necessary assistance for Nigeria to attain competitive edge in non-oil sectors of the economy.

Group Managing Director of the corporation, Dr. Maikanti Baru, stated this while delivering a goodwill message during the ‘NNPC Day’ at the 39th Kaduna International Trade Fair, in Kaduna, Wednesday.

“NNPC is suited to providing the enabling environment for the nation to optimise its commercial, industrial and agricultural potentials to attain competitive edge in these sectors. This is a commitment which we shall continue to abide by,” Dr. Baru stated.

To further demonstrate NNPC’s commitment on this goal, Baru explained that the corporation had set up the Renewable Energy Division which is focused on not only developing solar and other renewable energy sources but also on developing Biofuels that are heavily dependent on agricultural produce as feedstocks.

According to him, the multiplayer effects of such ventures are enormous. These include reviving the nation’s agricultural sector, generating millions of jobs, contributing significantly to power generation, producing high volume of animal feed, starch and other byproducts, in addition to the biofuels that will be blended to our Refineries’ petroleum products that will significantly reduce imports of petroleum products into the country.

Baru, who spoke on the theme: “NNPC and Promotion of Industry, Commerce and Agriculture for International Competitiveness” noted that to aid the course of focusing on industry, commerce and agriculture, Nigeria needed to begin with the end in mind by first undertaking a holistic policy actions towards rebuilding the nation’s infrastructure.”

In this regard, the GMD observed that that key infrastructure sectors that were expected to be upgraded include electric power, transport, information and communication, Roads, Water and Sanitation as well as rehabilitation of existing oil and gas pipeline facilities.

“It is my sincere belief that revitalising these critical infrastructure will emplace efficiency in the new focus areas of Commerce, Industry and Agriculture to buoy the national economy and enable the country’s entrepreneurs compete favourably with their peers across the globe,” he added.

The GMD also lauded President Muhammadu Buhari’s economic agenda which he said had saved the country from the vagaries of monoculture. “Every Nigerian, individual or corporate, has the onerous responsibility to ensure this vision becomes a reality,” he maintained.

On the recent fuel supply issues witnessed in some cities across the country, Baru said NNPC had, over the last few months, been engaging with relevant stakeholders to ensure the challenge remains “a thing of the past.”

Baru, who insisted that fuel scarcity was caused by greedy marketers, explained that the corporation had been collaborating with sister agencies towards addressing products profiteering, diversion, hoarding and smuggling.

Above all, he said, the corporation was working hard to get the nation’s refineries back to their optimal levels.

He listed some of the key stakeholders engaged by the corporation to include the Department of Petroleum Resources (DPR), Federal Ministry of Power, Works and Housing, the Nigerian Security and Civil Defence Corps (NSCDC), the Nigerian Customs Service as well as Nigerian Ports Authority (NPA).

Earlier in his speech, President of the Kaduna State Chamber of Commerce, Mines & Agriculture (KADCCIMA), Dr. Farida Dankaka, said this year’s theme was chosen to complement the efforts of the Federal Government in promoting economic growth through commerce and industry.

Dankaka, who was represented by Alh. Tijjani Musa, also commended the Federal Government on its economic diversification which has led to sufficiency in rice production, stressing that such effort should also be extended to other cash crops like cotton, groundnut, wheat, rubber, palm oil etc.

The Kaduna International Trade Fair is one of the most important events in the business calendar of KADCCIMA. Alongside Lagos and Enugu, it is one of the three local trade fairs attended by the corporation not only to enlighten the public on its various services, but also to educate them on the safest way of handling its products.