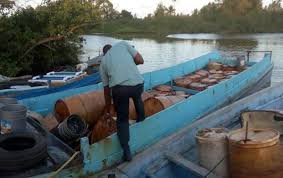 Abuja — The Nigerian National Petroleum Corporation, NNPC, Nigeria Customs Service, NCS, and the Department of Petroleum Resources, DPR, Tuesday, entered into an agreement to inaugurate a Joint Committee to tackle the growing incidents of petroleum products smuggling across the nation’s border towns.

In a statement in Abuja, the NNPC said the strategic move to tame the malaise was decided at a meeting at the Customs House in Abuja and was attended by the Group Managing Director of the NNPC, Dr. Maikanti Baru, the Comptroller General of NCS, Col. Hammed Ali (rtd.) and the Director of the DPR, Mr. Mordecai Ladan.

Baru explained that the malaise also denied Nigerians the full benefits of the goodwill of the current administration.

He said, “The negative economic impact of smuggling is that it is undermining Nigeria’s economic growth as a huge amount of money is spent in terms of under-recovery. This huge loss is draining the treasury. Remember, these are monies that could be used to develop several critical sectors of the economy.”

He said while the NNPC had not relented on its efforts to flood the nation’s petroleum products market and avoid shortages at all times, the activities of unscrupulous marketers remained a major concern as diversion and smuggling seem to continue unabated.

According to Baru, available records showed that there was an upsurge in incidents of petroleum products smuggling across Nigeria’s borders in recent months, which is incentivized by the high rate of arbitrage, especially considering the high price of petrol in Nigeria’s neighbouring countries.

While calling for stiffer punitive measures against unscrupulous marketers found diverting and smuggling petroleum products, Baru charged the Customs to intensify surveillance along the identified border communities and other suspected areas to check the activities of petroleum products smugglers.

Earlier in his remarks, the Customs boss, Col. Hameed Ali (rtd), said the Joint Committee was necessary in order for the three organizations to collaborate and find a lasting solution towards halting the smuggling of petroleum products.

Ali said working with information on a real-time basis, the Service would leave no stone unturned to ensure that smugglers of petroleum products are stopped in their tracks.

“We have enough men and resources that can manage the nation’s 4,070km border-line and address this menace once and for all. What we need however is information on a real-time basis,” the Customs boss stated.

Also speaking, the Director of DPR, Mordecai Ladan, said the Department was open to collaborations with sister government agencies towards addressing the menace of smuggling.

Ladan, who attributed the surge in smuggling to high arbitrage and culpability of unlicensed filling stations, said his organisation would not hesitate to name and shame the perpetrators in the nearby future.

“As the industry regulator, we are only aware of 1,900 licensed filling stations. We will, however, continue to provide more information for this Joint Committee to succeed,” Ladan stated.