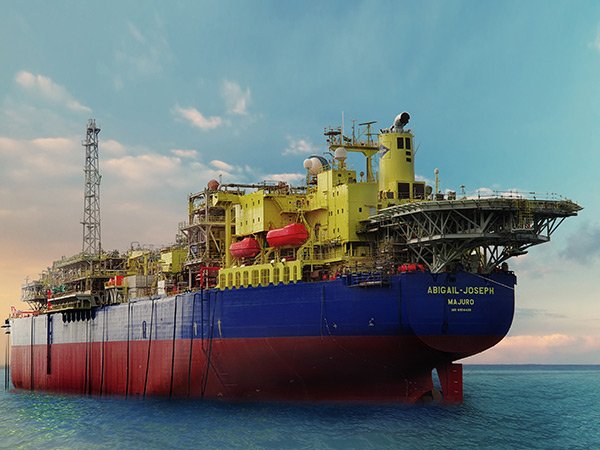 In a statement First E&P said prior to her sail-away, the FPSO underwent upgrade, refurbishment, and life extension work in Keppel Shipyard, Singapore, to meet specified standards and specifications, noting that “the excellent partnership between NNPC, Department of Petroleum Resources, DPR, First E&P, Yinson and Keppel Shipyard, helped ensure these critical pre-deployment activities for the FPSO were completed in record time.”

According to the statement, a team of young Nigerian professionals were part of the successful extension works in the Keppel Shipyard and they will form an integral part of the FPSO operations team in the production phase, adding that the FPSO is a 274 metres long converted Suezmax trading tanker. It is self-propelled with 11 cargo storage tanks, two slop tanks, and six dedicated water ballast tanks including fore and aft peak tanks.

“The FPSO will be deployed in the Anyala and Madu fields, offshore Nigeria as part of OMLs 83 & 85 field development, Nigeria’s first wholly indigenously-executed integrated oil and gas project in the shallow offshore. The processing system on the FPSO includes facilities for oil separation, stabilisation, produced water treatment, gas treatment, and compression.

“The ongoing development drilling campaign in the Anyala field is focused on drilling and proving expected oil reserves for development. A total of seven development wells have been planned and approved by DPR,” the statement said.

Anyala field will be developed along with the nearby Madu field (OML 85) through a shared production facility. The produced oil will be processed through the Abigail-Joseph FPSO. Associated gas and non-associated gas developments will be fully integrated into a gas-integration hub designed to feed an export line for the local gas market.