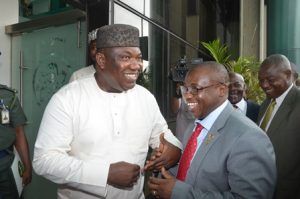 28 March 2018, Sweetcrude, Lagos – The Nigerian National Petroleum Corporation, NNPC, says it has partnered with the Enugu State Government to revamp the strategic Enugu Depot towards meeting the petroleum products demand of the entire South-East region and beyond.

NNPC’s Group Managing Director, Dr. Maikanti Baru, who disclosed this, described the Enugu Depot as a major NNPC supply and distribution infrastructure, which besides serving the South-East region, acts as a bridge to some part of the northern region.

“This depot is not only strategic to the South East, it also serves as a bridge to Makurdi Depot in the North Central as well as the Yola Depot in the North East,” Baru stated during a visit to the Enugu State Governor, Hon. Ifeanyi Ugwuanyi, at the Government House, Enugu.

The NNPC boss, who lamented the incessant acts of vandalism on the Aba-Enugu products pipeline, maintained that there had been 700 breaches on the pipeline, a situation that has hampered efficient supply and distribution of petroleum products not only in the state but in the entire South-East region.

He explained that even after the Aba-Enugu pipeline was repaired after the breaches, it still had to be shut down as the corporation hardly got up to 50% of the products pumped.

According to the him, the Osisioma and Nsirimo areas (both in Abia State) as well as Ishiagwu (in Ebonyi State) were the major vandalism flashpoints along the line where illegal connections for diversion of products, had been observed almost on a daily basis.

Baru called on the governor to rally his counterparts in the region to work with the NNPC and security agencies to secure the strategic pipeline, which good condition, he said, would go a long way in reviving efficient supply and distribution of petroleum products in the area.

He also charged the governor to collaborate with relevant government agencies to enforce the sale of petrol at fuel stations in the state at the government-regulated price of N145 per litre.